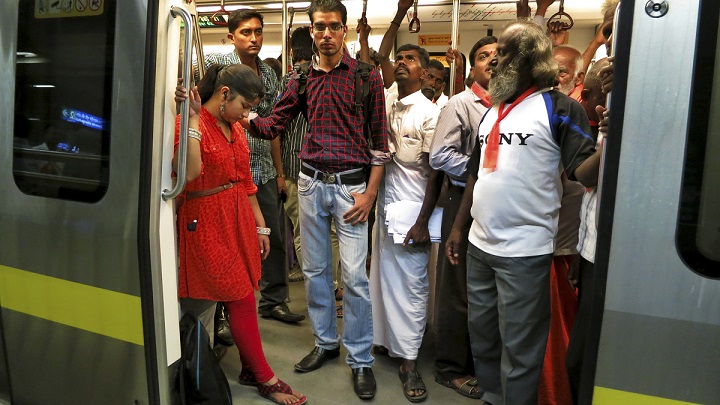 Hi! I am, well you saw my name above, didn’t you? Don’t feel guilty if you missed it. Girls aren’t that big of a deal in India or where I currently live, Delhi. After that gang rape incident last year, I have no reason to feel safe. It’s not that I felt safe before 16th December but that incident has definitely changed a lot of things. Images of Sheila Dixit and Sonia Gandhi are on almost every hoarding in Delhi, symbols of power, signifying progress and yet, I feel unsafe and uncomfortable every day.

I’ll tell you my story, but before that I want you to know about my education. Fortunately, my parents understood that my education was as important as my elder brother’s. So we were both enrolled in a convent school in a small town in Uttar Pradesh. The town I come from has no airport or five-star hotel. It does however have a railway station and a shopping mall with a McDonalds. I had to mention McDonalds because it’s a big deal in India.

So, getting back to me, I finished class 10th and  decided to study Science. My neighbour Mrs. Kumar, almost died of a heart attack when she heard of my decision. Girls studying Science is a big deal, girls choosing to study Home-Science is the set convention. According to Mrs. Kumar, girls have to be married after college, so they better learn cooking and other household work. By the way, Mrs. Kumar is the president of a community in our locality which stands for women rights.

Science didn’t work out well for me, so I switched to  Arts. Half my family was happy because I was doing what I wanted to, the other half was glad because the academic fee was much lower. Don’t get the wrong impression about my family; it is like that in most parts of India. The education of girls is usually considered secondary.

I live in a paying guest accommodation in the northern part of Delhi. It is a good area, full of college students. It also has a local metro station. My day begins with an hour-long ride in the metro to college and ends with an  hour-long ride back home.

For the average man working in an average job, , the toughest part of his day might be the time when he has to face his boss in office or get through workplace  politics. But for me and most other girls my age, the toughest part of our day is traveling to our colleges/offices and back safely. Thankfully, no one has been raped in a metro yet (it’s always crowded),but there is another kind of harassment that goes on in metros, one without any physical contact. It involves only the eyes.

Delhi Metro has reserved the front compartment for women. During rush hour, the compartment is overcrowded by the time the train arrives at my station. Having no other option, I get into the general compartment and this is where my story starts.

It had been 48 hours since the 4 perverts had been sentenced to death. Like all women, I thought I had a reason to be happy. Like every day, I got into the metro. Delhi summers can sometimes be harsh so I was wearing a sleeveless white Kurta and a pair of blue jeans. The moment I got into the metro, I realized I had made two big mistakes; wearing a sleeveless top and wearing white.

The general compartment was packed with people. There was enough space to stand but no place to sit. I plugged in my earphones and stood near one of the train doors. A few minutes later I noticed a man, not more than 28 years old, staring in my direction. He was staring at my body with concentration. I didn’t look at him right away, but after a couple of minutes it was clear he wasn’t looking at my face; he was more interested in what was six inches below my face.

A few more uncomfortable minutes passed by, the man was still staring without any shame. I decided to stare back at him. That didn’t make even a slight difference and I pulled my eyes away. I decided to walk to another compartment and find myself a comfortable space to stand. While I was walking towards the other compartment there was a sudden jerk and the train came to a halt . A man almost fell over me, rubbing his hands against my back. I looked back angrily; the man had an apologetic face. Not knowing what to do, I walked away to what I thought would be a comfortable spot. How wrong was I!

The train was now running above the ground so I was standing with my face towards the window, enjoying the air-conditioner and the sun. Delhi looks beautiful when viewed from a height. I was glad that no one was staring at my breasts. I made a mental note to reserve all my white tops for home-wear and even thought of discarding a few of them. 3 songs and 7 stations later, I was feeling a bit more comfortable. That pervert was gone, but only to be replaced by a new one.

I am not the only woman who is stared at. There are many girls and women like me who have to fight such stares everyday. Most of us want to walk up to all those perverts slap them across their faces. Some of us want to kick them in their balls. Unfortunately, most of us do nothing, not even abuse. If a man stares at me, he is a man, if I abuse him or ask him to control his penis, I am a bitch.

So, with my face towards the window, I was lost in a new song by my favorite band. I looked back for a second and found two men sitting. They looked young and were dressed shabbily. 5 songs and 8 stations later, I turned back and saw one of them staring at my ass.

For those of you who have a problem with me using the word ass, there is a problem you need to consider, the problem of women being looked upon as naked flesh by strangers every single day in a free country. I wasn’t going to walk to another spot this time so I decided to stand right where I was and face those two jerks. Thankfully, one of them disembarked at the next station. The other one, realizing that I was staring at him now, looked in the other direction probably searching for another ass to leer at.

I didn’t take my eyes off him. I wasn’t going to kick him or slap him. If I did, the other passengers might mistake me for a sex worker. Yes, that’s how things work here. If a man stares, it is because he is a man. A woman slaps or abuses this man, she is a bitch. I kept staring at him because I wanted him to know that I wasn’t scared. I wasn’t tormented by his staring, his eyes or his presence.

These brave minutes were followed by the announcement for my station. Doors were going to open on the side where he was sitting. I secretly wished that the doors would open on the wrong side so I could push that man off the train onto  the tracks. I got off the train and looked back at him.

There was no shame or apology in his eyes. Maybe he thought it was his birthright to stare at every girl in Delhi. Maybe he thought as long as he was ‘only’ staring, it was harmless. The train moved on and so did his sight, from one girl to another, looking for his next target. I quickly moved towards the station exit and continued with my day.

This post is not about what I want or what I deserve. It is also definitely not about me alone.It is about all us Indian women who are destined to travel like this, live like this.

If we protest, we are tainted, if we speak out, we are outspoken, if we dress as we please,  we are vulgar, if we express an opinion, we are bitches .

Is there any version, in which we come out as human beings?