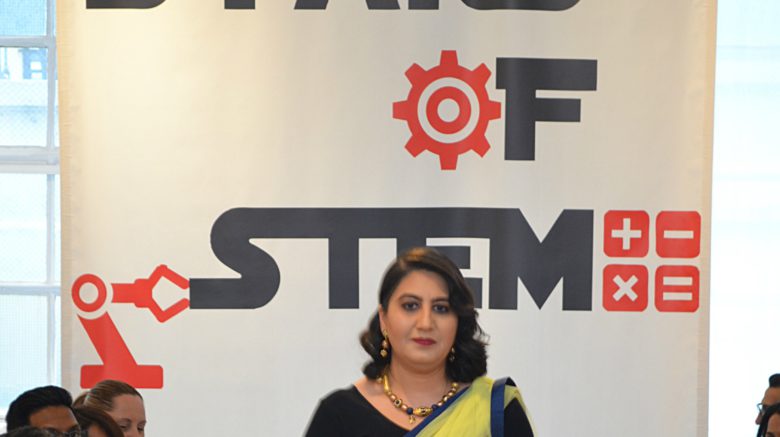 Sixteen South Asian women draped in colorful sarees and graced the catwalk at the Rogue Space Gallery in Chelsea, Manhattan on June 25.

But this was no ordinary fashion show because the models were South Asian women in STEM (Science, Technology, Engineering and Mathematics) fields, also considered role models by the community.

According to Dass, the fashion show was an “opportunity to be elevated, illuminated and celebrated for fifteen minutes” as South Asian STEM leaders.

Dass’ goal in organizing Stars of STEM was a combination of two suggestions—hosting a LadyDrinks event for STEM women and a fashion show, which, she said, came together after seeing friend Carrie Hammer coordinate a fashion show with role models rather than runway models.

“… It hit me. I was like ‘This is it. This is what I’m going to do.’ I’m going to have a runway ramp full of role models, South Asian women, in STEM,” Dass said.

Potential models applied and were selected by an independent board to certify fairness, and the women that attended the event were evidently highly qualified, Dass added.

The chosen role models come from various backgrounds and career paths, ranging from chemical engineers to high school teachers in STEM fields. Yet all of the women shared traits that qualified them for the show: ambition, passion, independence and determination.

As South Asian women, each one faced adversity while challenging traditional expectations, but overtime, all were able to overcome those obstacles through the support of loved ones. For Ernst & Young technological financial consultant Akanksha Thankur, that was her parents.

“From day one, I remember my parents telling [Thankur and her older sister], ‘You guys have to be independent; you have to go to school, get your degrees, get a job, and become financially independent.’ So I didn’t know the world otherwise,” she said.

Thankur said she was surprised that her friends were told to behave a certain way for marital desirability.

“I’m like, ‘I never heard that language.’ My home was all about studying, get a job, you have to take care of yourself,” Thankur said.

For other women, seeing loved ones in STEM fields cultivated a passion and confidence in scientific studies. Stars of STEM role model Zalini Bhagroo said she was raised to be confident in her interest of chemistry as the only sister of five older brothers in STEM, which kept her unfazed in her pursuit of a biochemistry degree.

“Whatever sport they could play, I could play as well, so I think it didn’t matter to me that I’m a woman and that I’m in this field. I never looked at myself as being different or exceptional, I just thought this is what my life is, this is what I’m going to do,” Bhagroo said.

Her self-confidence in her field influences how she raises her own daughter to be independent and driven. “I think she follows in those footsteps of ‘Mom can do this; Mom can do that,’ and I don’t even have to tell her. I think she understands, ‘Hey, if I can do it, so can you,’” Bhagroo said.

Economist Shruti Kapoor merged her economic expertise with her eagerness to combat South Asian rape culture. Kapoor was deeply affected by the 2012 Delhi gang rape and sought a way for women across the world to help. This culminated in Sayfty, Kapoor’s project that educates Indian women and girls about violence against women. Women are equipped with pepper spray and self-defense classes, and this knowledge acted “almost like a confidence-booster,” according to Kapoor.

“The whole idea of taking charge of your personal safety is a fairly new in India. People have always been raised like, ‘My dad will take care of me or my brother,’ or ‘My husband needs to take care of me,’ so this whole concept of ‘I need to take care of my safety,’ is a new one,” Kapoor said.

After feeling powerless seeing continued violence against women in India, Kapoor has seen the change in empowering women in a grassroots way, from self-defense classes to social media. “A lot of us close our eyes to it and feel, ‘Oh, we’ve seen enough of this and nothing is going to change, but each one of us has the power to take that small step and change,” she said.

Each STEM woman makes a world of difference in her own, unique way–for Jaya Mohanan, it is through clearing the air of environmental pollutants. Mohanan, a chemical researcher with BASF, has a Ph.D in Chemistry, a challenging feat from a woman who is the first degree-holder in her family. Mohanan said seeing her own role models–in teachers and her grandmother–inspired her to be a role model for her family.

“[My grandmother] went to school up to third grade, but she always told me how important it is to go to school and stick with school. It’s that spirit that I took away from her,” Mohanan said.

Despite their profound accomplishments and persistence, these women were both humble and grateful to be celebrated in designer sarees by Mitan Ghosh.

For Mohanan, it made her feel less alone as a woman in STEM.

“After seeing all these stories and all these incredible women, [I see that] this is typical of us, this is what we have to go through, but I’m not the only one going through it,” Mohanan said.

Thankur acknowledged the uniqueness of celebrating women in STEM, especially in a glamorous fashion. “Once in a while, we should celebrate our achievements, which we don’t tend to do that much, so I think this gives us all a platform to do that,” Thankur said.

In addition to showcasing women in STEM, a portion of the proceeds from the event went towards a scholarship for a young girl from the Boys and Girls Club of Newark (BGCN).

With eight million jobs in STEM fields projected to be added by 2018, having prominent female South Asian role models like these can inspire a new generation of young women to step outside of traditional South Asian roles to follow in the steps of successful STEM leaders.