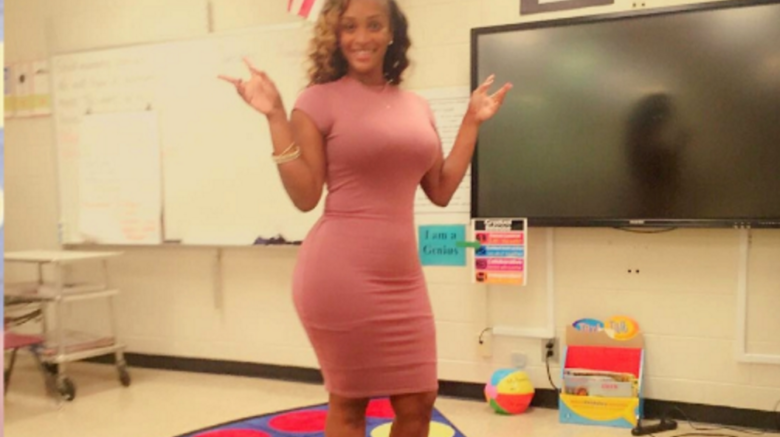 As a society we condemn women for the clothes they wear while claiming that sexism is no longer a problem. The Burkini ban in France publicly undress women wearing modest muslim beachwear or kick them off the beach completely. People cry “Oppression of women!” and point at modest clothing, as they shun and embarrass the women wearing those clothes.

On the flip side, we have #TeacherBae, who is currently the subject of online fulmination because of tight clothes that reveal her curvy body shape. Unfortunately for every 100 comments about her “inappropriate” attire, there are only one or two comments highlighting her achievement as Teacher of the Month.

Women are often criticized even when they are wearing business casuals. In 2014, Australian newscaster Karl Stefanovic wore the same self-described “cheap Burberry knockoff” suit every day for a year. No one even noticed Karl’s repetitive outfit, never mind criticized it. On the other hand, viewers harshly judged his female counterparts based on what they wore. According to Karl, because he was a man, he was judged on the quality of his work, and not by his looks or his outfit.

“Reveal your body!” shouts one side. “Put more clothes on!” shouts the other. “That blouse is horrible!” shouts the back. I can’t be the only one who is beginning to feel like women just can’t win.

We continue to see women as objects. As a result, society tends to focus on how women look, rather than their actual qualifications or personality traits. Why do we criticize #TeacherBae for her tight outfits, but not slimmer women wearing similar clothing? The real problem is not #TeacherBae’s curves or the newscaster’s bright color blouse. The mainstream oversexualization and objectification of women is the problem. And if women choose not to conform to western society’s beauty standards of wearing tighter or more revealing clothing, as is with the burkini, they still can’t catch a break.

Let me make this very clear. This is not about the clothes that women choose to wear. This is about degrading and controlling women.

We skew women and girls dress codes in efforts to reduce distractions from their male peers and teachers. Men and boys should not stare at and sexualize women. Women and girls don’t need to hide their bodies from men. We don’t make rules for boys’ clothes, then why for women? No one ever thinks that males who show too much skin are somehow distracting women from doing their jobs.

Women’s bodies are not any more sexual than men’s bodies. If we did not repress women’s sexuality and shame it, people would realize that women often have sexual urges towards men too. Somehow though, women control those urges, because we see men as people and not sexual objects.

We often ask female survivors of sexual assault what they were wearing to “provoke” the attack? How easily we dismiss the rights to her own body and the concept of consent by the clothes she wore. If this idea were even remotely accurate, the burkini would probably be a much more popular beach option for women, as bikinis would produce a sexual assault spree. Not only does this incorrect idea continue to reduce women to sexual objects, it reduces men to barely-functioning robots incapable of basic human decency. Both women and men deserve better than that.

An outfit doesn’t have any bearing on a woman’s ability to do her job or to be a good person. Nor does it ever promote or condone sexual violence. We need to be honest with ourselves about sections of our society that still see women as less-than. It’s not the clothes that generate controversy. We are shamed no matter what we wear. It’s about how society views women and sees it within their rights to control and shame women on a daily basis. Our freedom is not in specific clothes. The freedom lies within the choice to wear what we want and be free from harassment and violence.

I feel sorry for women whose bodies are on display for entire nations to scrutinize. I am with every woman shamed for their body or their clothes. Whether you’re wearing lingerie, a burka, or a damn Cookie Monster costume, I stand with you. Your clothes do not define you. You deserve respect. Congratulations, #TeacherBae for scoring Teacher of the Month. Way to go, newswomen around the world, for continuing to infiltrate a once male-dominated field. And to the Muslim women in France you are welcome on our New Jersey beaches any time. I’ll even carry your beach chairs.

It’s so easy to spread love and respect for all genders. Let’s start doing better for our women and put an end to this senseless pattern of discrimination.

ABOUT THE AUTHOR
Mariel DiDato is a graduate of Rutgers University. She fights for women’s rights and her interests lie in reproductive justice and gender-based violence prevention. Maria was Sayfty’s #VOTW, and has written for Stop Street Harassment and The Huffington Post. She volunteers for a number of organizations, including the Planned Parenthood Action Fund and the Rutgers Office of Violence Prevention and Victim Assistance. You can follow her on Twitter at @marieldidato