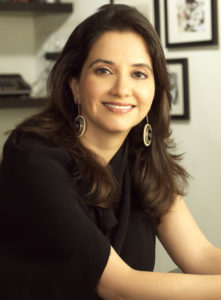 Anupama Chopra is an Indian author, journalist and film critic. She has written several books on Indian cinema and has been a film critic for NDTV, India Today, as well as the Hindustan Times.

Tell us more about yourself and what you do. Why did you become a film journalist?
I am a television anchor, I’m a writer, I’m a film critic, I do books, columns, so I do many things and all of them have to do with cinema. How I became a film journalist was actually really random. I had no designs on becoming a film journalist. I actually wrote for papers and even when I was in college, my professor Eunice D’souza used to edit the books page for The Independent newspaper which was shut down many years ago and I used to do book reviews for her, but film journalism was never something I had actually thought about. It was completely random because I had graduated from St. Xavier’s college and I really didn’t know what I wanted to do and one of my professors suggested that I start working with a magazine called ‘Movie’ just as a stopgap arrangement till I figure out what I wanted to do. I went and gave a job interview at ‘Movie’ and thankfully was hired and completely hooked from the first day. I never ever wanted to do anything else and that was more than 20 years ago and I am still here doing this.

Two decades ago, a career in film journalism was unthinkable for women. What challenges did you face in your chosen career and how did you overcome them?
Actually no. There were many film journalists who were women, but it was not considered a great career for men or for women. It’s impossible to believe now, but the mainstream media did not cover films in any way. Mainstream Hindi films were considered really low class and educated people who were affluent and people who lived in south Bombay, like I did, did not even watch Hindi films. They were sort of like the ‘opium for the unwashed masses’. So for my parents, the fact that I would graduate at the top of my class from St. Xavier’s college, which was very ‘south Mumbai’ and hip & cool and then choose to do film journalism- to go from Film City to Filmalaya and talk to Sanjay Dutt and Amrita Singh was just unthinkable. They were like, ‘What are you thinking?’ So it was a place that most people preferred not to go into because if you were seen as a journalist you did politics, you did business, you may be doing sports but you definitely didn’t do films. You would not do Hindi films. So in that sense there was a prejudice against it and at that time the industry was also a different place. It was very full of old school thinking and old men in white safari suits who did cash deals. It was completely another universe. It was like the ‘Wild West’. My parents were stressed that I was choosing to be in the ‘Wild West’, but what I did want to do is film journalism in some other way than what it was done and therefore, I went to North Western University and I got a Masters in journalism. Then I worked at Harper’s Bazaar Magazine for a year and then I came back to India to do what I always wanted to do, which is Bollywood.

Tell us more about ‘The Front Row with Anupama Chopra’. Any behind-the-scenes anecdotes you can share?
It was a great experience, it ran for two years, the show has wrapped now, but it was a show that I really enjoyed doing. It was great fun. The show’s set at Mehboob Studios in Mumbai had become our home and we practically lived there because in the second year we also did a Hindi show, so I was literally shooting two interviews back-to-back. Everything had to be done again in Hindi, so we did the ‘The Front Row’ for Star World and we did ‘Star Verdict’ for Star plus and both of them were great fun. There were many ‘behind the scenes’ moments that were fun. Here is the link to the show’s YouTube page.

What do you enjoy more: writing, film critiquing or anchoring? What advice would you give to aspiring film journalists/authors?
I enjoy all of it, I find that it needs a muscle to do different things. Writing for print is very different from anchoring and very different from doing television interviews. I find that if I don’t write for print long  enough then I become rusty and it gets difficult for me to actually sit down and do it. So I enjoy all of it. I think for me the most challenging is books, because it’s like long distance running. One really needs to stay invested in it for many months and without enough of a payback. And I don’t mean payback just in terms of cash but in terms of reaching out to people. Though I find that some of the books I’ve done like the first book ‘Sholay-The making of a classic’ has had an incredible impact and it has reached people in ways that I didn’t imagine. So book writing is extremely satisfying and extremely challenging and all of it appeals to me.

My advice to aspiring film journalists would be to see as many films as they can and to read the great film critics – Roger Ebert, Anthony Lane, A.O. Scott, Pauline Kael, Andrew Sarris.  These are the masters that I continue to learn from.

What is your idea of an empowered woman?
I think a woman who is able to make her own choices is somebody who is empowered. I think it’s also about the circumstances that you’re in and that you’re born in and how difficult it is for you to move up to find an education. I think empowerment is the freedom to make your own choices.

Message for our readers related to women’s personal safety and the issue of violence against women.
I have a young daughter and it’s very frightening for me because I don’t think any of us can now sit back and say, “Well this shit happens to other people”. It doesn’t. It’s in your backyard, it’s happening everywhere, it’s happening at every level of society and I just think that we need to make kids extremely aware of what is ok and what is not ok. I used to hear this saying that, “Only the paranoids survive”, but I think it’s true. I think at some level, we all need to be a little bit paranoid, we need to be strong; we need to give it back.

Bio
Anupama Chopra is a film critic and book author. She has written about the Hindi film industry since 1993. Film Companion is her latest love letter to the movies. She is the film critic for Hindustan Times and NDTV 24/7 and a contributing editor to Vogue (India). She has anchored ‘The Front Row’ on Star World and ‘Star Verdict’ on Star Plus. Anupama also presented and scripted a weekly film review show called Picture This on NDTV 24/7.  Her work has been published extensively in India Today, India’s largest English language magazine. She has also written about Bollywood for various international publications such as The New York Times, The Los Angeles Times, Variety and Sight & Sound.