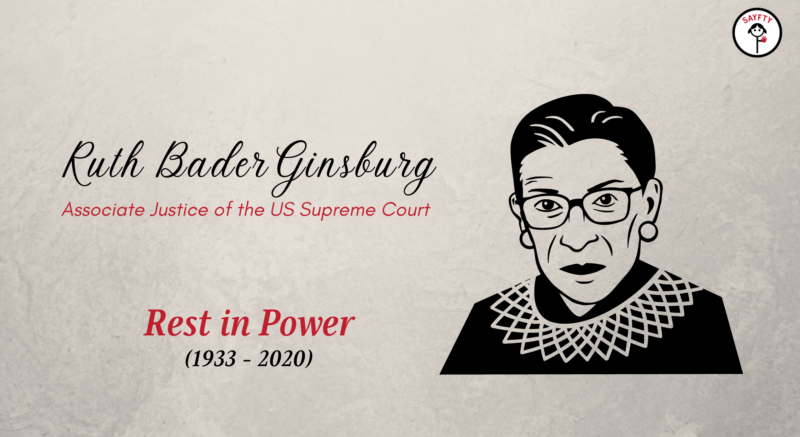 After surviving multiple bouts of cancer and surgeries, while surrounded by her family, an 87-year old woman passed away. This is sad news but why is it newsworthy? Well, the woman in question was Associate Justice of the United States Supreme Court, Ruth Bader Ginsburg, aka Notorious RBG.

Thankfully, none of the scenarios mentioned above are true — anymore. Ruth Bader Ginsburg and her colleagues successfully put laws in place to end such practices. Take a minute and check off the situations that apply to you or someone you know. And these are only a fraction of Ginsburg’s accomplishments. RBG positively changed the life of every woman in the United States.

Let’s take a look back at some key moments of RBG’s legacy and her impact on the women’s rights movement.

As an alumnus of Rutgers, this caught my attention. Four years after graduating first in her class (in a tie) at Columbia Law School, Ruth Bader Ginsburg became the second female law professor at Rutgers Law School. While there, her students asked her to start a seminar on women and the law.

“Rutgers students sparked my interest and aided in charting the course I then pursued. Less than three years after starting the seminar, I was arguing gender discrimination cases before the Supreme Court.”  – Justice Ruth Bader Ginsburg

It was during this time that RBG began working with the New Jersey chapter of the American Civil Liberties Union (ACLU). The goal was to defend gender equality cases in court like Reed v. Reed in 1971. In this landmark case, the US Supreme Court ruled in favor of RBG’s client. They stated that it was unconstitutional to give preference to men when determining the administrator of an estate. (check the 3rd scenario I laid out above).

In 1972, Ginsburg became the founder and first co-director of the ACLU Women’s Rights Project. It fights for women’s rights in the areas of employment, violence against women, criminal justice, and education. It was through this program that RBG brought five more cases to the Supreme Court and won all but one. It’s important to note that the Women’s Rights Project still exists and continues to fight for gender equality on the path that RBG laid out.

RBG: The 2nd Woman to Serve on the US Supreme Court

In 1993 President Bill Clinton nominated Judge Ruth Bader Ginsburg to the Supreme Court. The US Senate confirmed the appointment in a landslide, bipartisan, 96-3 vote. In today’s political climate, it is unimaginable that a liberal judge in favor of the women’s right would be confirmed to the highest court in the land by even the most conservative senators.

During her tenure on the Supreme Court, Justice Ginsburg became well-known for her dissenting opinions. She gave these when she was passionately opposed to the majority opinions that decided cases. While RBG wrote several dissenting opinions over the years, one really stands out to me – Ledbetter v. Goodyear Tire & Rubber Company.

Lilly Ledbetter sued her employer, Goodyear, for pay discrimination after learning that her male counterparts were making more than her. In 2007, the Supreme Court voted 5-4 in favor of Goodyear. According to them, Ledbetter had waited too long to file her discrimination lawsuit. In her dissent, Justice Ginsburg pointed out that many people don’t know their colleagues’ salaries. So how can they can’t know if they’re being paid less for doing the same work? And thus they can’t possibly sue within the appropriate timeframe. Ginsburg also urged Congress to take action so this can’t happen in the future. And that is exactly what they did. One week after his inauguration in 2009, President Barack Obama signed the Lilly Ledbetter Fair Pay Act into law. It made it easier for workers to challenge unequal pay.

The Enduring Legacy of RBG

Ruth Bader Ginsburg was truly an inspiration to generations of women. At Harvard Law School, RBG excelled in her coursework, helped her cancer-stricken husband with his courses, and raised their young daughter. Her commitment shows us that if we want something badly enough, we can reach our goals.

Think back to the scenarios I presented at the top of this blog post. They represent just a portion of the impact Ginsburg had on the law and every citizen’s daily life. Things like serving on a jury and applying for a credit card are definitely acts that I take for granted.

I never went to law school but I did consider it, with Rutgers Law School being in consideration. However, never once did I consider getting rejected because of my gender, race, or disability status. Yet another thing I have taken for granted because of Justice Ruth Bader Ginsburg.

Whether you agree with her views or not, you cannot argue with the enduring legacy of RBG. She undoubtedly has changed the entire course of the country. She spent her career fighting for gender equality and the rights of many marginalized groups.

It’s also important to note that she did not make these strides alone. In her nomination hearing, she said, “I surely would not be in this room today without the determined efforts of men and women who kept dreams of equal citizenship alive in days when few would listen. People like Susan B. Anthony, Elizabeth Cady Stanton, and Harriet Tubman come to mind. I stand on the shoulders of those brave people.”

I mention this because as sad as RBG’s passing is, it is important to honor her legacy. Therefore, the best way to do that is to keep the forward momentum towards gender equality going. It’s time for our generation, and the next, to take up the torch and continue the fight.

In conclusion, if you are eligible to vote in the upcoming US elections, please register and exercise your right to vote! As a disabled BIPOC woman, I’m acutely aware that had I been born in a different time, I would have been disqualified from voting for belonging to any of the groups mentioned above.

“Feminism [is the] notion that we should each be free to develop our own talents and not be held back by manmade barriers.”