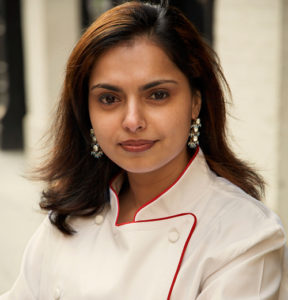 Maneet Chauhan is a celebrity chef who started her culinary journey in India. A graduate of  Welcomegroup Graduate School of Hotel Administration and the The Culinary Institute of America she is now a US-based television personality and a permanent judge on Food Network’s famous show – Chopped.

Tell us more about yourself and what you do. When did you know you wanted to become a chef?
My parents always joked that I was born with a ladle in my hand. I have loved food and cooking forever. I grew up in a small town in India called Ranchi, where, in a colony, there were people from all over India. Every state in India has a distinct cuisine of its own. As a kid, I would finish dinner at home, then go to a neighbor’s house and tell them “Mom hasn’t given me anything to eat, can I eat at your place?” It used to be very fascinating because I would sit with them in their kitchen and actually watch them cook. I would ask questions about the cooking process. The ingredients and spices they used were never used in our house. We were a typical Punjabi household. I would constantly experiment with these. Whenever I visited my sister in college, I would take cake or whatever I made. I had become the most popular kid on campus. Everybody would look forward to my food and I thought, this is amazing, because food can impart so much happiness and, I realized this is what I love. That’s basically when I made a conscious decision to take this up as a career and I was very lucky that my parents were extremely supportive of this decision. They said “Do what you want, just make sure that you excel in it, you are the best at it.” And that’s the mantra I follow to date.

What has been your biggest challenge in this entire journey? How did you overcome it?
I chose to be in an unconventional industry. This is true not only for India, but also for the US. I went to work for the TAJ, right after graduating from college. Many chefs there, had the perception that I was only pursuing this as a hobby; that my intention was to spend some time in the kitchen, then get married and settle down. I was the only female in a kitchen of seventy men. Very often, they would be tougher on me to test how much I could take.

I decided to come to the US for further education at The Culinary Institute of America (CIA). I had a M1 visa, which didn’t allow me to work on or off campus (unlike an F1 visa). Coming to the CIA was a dream come true because if you are in the food industry, CIA is the best institute in the entire world to go to. It’s an amazing feeling; you’re under the same roof with two thousand other people who are as passionate and crazy about food. I was the only Indian around for the 21 months I was there. It was an interesting experience because I was learning a lot, and getting to know a new country. This not only made me a stronger person, but it also gave me the ability to adjust in a different environment and that was very helpful.

In terms of challenges and struggles, I graduated from CIA at the top of my class and bagged all the awards. One would think, it is easy to find a job with such high merit. But, again, this is an industry where not many people from overseas had come over. A lot of the coveted jobs or the top chefs I wanted to work with, offered me a job, and as soon as I would say that I need my paperwork to be sponsored, they would drop me like a hot brick. That was a tough period. Fortunately, somebody I knew was opening an upscale Indian restaurant and I was lucky enough to be hired there. It wasn’t something I really wanted to do but I decided to give it a shot. It was such a valuable experience and I learnt a lot, including how to run a successful business. After four years, when I thought I had a good amount of experience, I moved to Chicago. I was in love with the city’s rich food history and vibrant culinary scene. The owners of Vermilion were looking for a chef. They had interviewed over 40 chefs, all male. I was doing an internship at a restaurant then and decided to apply. Rest is history. I spent seven good years with them. The vision they had was something I could execute and I had some amazing times.

What was your inspiration behind starting your first restaurant Chauhan Ale & Masala House? It’s a micro-brewery and gastro pub, what gave you the idea of pairing beer with Indian food rather than wine?
Everybody spends so much time trying to figure out what wines go best with Indian food. It’s not a natural marriage, if you think about it. Growing up, everyone in my family preferred beer over wine. Indian cuisine is very difficult to pair with wine because we use such beautiful spices. So unless you have the right wine, the spices will overpower the wine. Indian food is generally paired with sweet wines like Riesling, In my opinion, Riesling kills the flavor rather than enhancing the beauty of the spice, which is what wines do. My husband and I were chatting about it and in the course of discussing the India Pale Ale (IPA) thought, why not take some spices and spice our beers with them. That’s how the idea started. The first beer we are serving at our restaurant is saffron cardamom ale and whoever tastes it is completely loving it. We spent a year coming up with different recipes and some very interesting combinations; garam masala, rose and jalapeno, curry coconut, mango mint to name a few. Also, we were keen to work with the local brewers. We provide the recipe and the brewer executes it. The restaurant is opening in Nashville soon

Who is your role model?
I don’t have one person as my role model. I draw inspiration from everybody. I feel, everybody has something to offer which you can learn from.. So be it, somebody who I have been reporting to or somebody who is reporting to me, there’s always that something I can learn. I have an open mind and I am constantly trying to learn.

What’s the exciting and challenging thing about judging Chopped on Food Network? Does the food actually taste good with some of those weird combinations in the mystery basket?
I think the most exciting part about judging Chopped is the people aspect of it. For example, the judges that I judge with bring such a unique perspective to judging, one that is completely different from mine. All of us have a unique vision of food but the common denominator is that we are all passionate about food and love it. So, that to me is the most exciting part. Also, the contestant, they are so distinct in their own rights. At times they make dishes, which are absolutely vow! I think that is literally the most exciting part- the human factor, which I love.

The baskets are very carefully thought off. They are not four random ingredients, thrown together. These are ingredients, which the Food Network’s culinary team has thought through. So, if they cannot come up with interesting recipe combinations they will never pick the ingredients. With respect to the actual dishes, some of them are spectacular and delicious. The contestants come up with such creative dishes that it’s mind-boggling. And yes, there are also a lot of dishes, which are a big question mark and are challenging. So you do get to see both – creative, delicious food and sometimes not. But overall, it’s a fabulous experience and I am grateful to be a part of it.

On a lighter note, what’s your regular comfort meal? Do you have a guilty food pleasure?
Because of the industry that I am in, and the amount we eat out, at the end of the day, my comfort food is ‘dal chawal’ (lentils and rice). In terms of guilty pleasures, my husband makes amazing chicken curry. The amount of time he takes to prepare it, all the love and care he puts into cooking it, makes the dish so delightful!

What is your idea of an empowered woman?
Confidence in oneself and one’s ability. That to me is an empowered woman. Women spend so much time looking outside for validation and for approval. I think they need to look inside to realize how incredible and extremely strong we are as humans.

Message for our readers related to women’s personal safety and the issue of violence against women.
More so now than before, this is an important subject, because this is beyond me. Now that I have a daughter, I look at things in a completely different way. Women’s safety is something that cannot be taken for granted. It will take an entire society for women to be safe. There is a sense of safety and security here in the US. Being in this industry, there were times in New York or Chicago when I would come back at 2 or 3am in the morning and I didn’t have to think about it twice. One cannot imagine such a thing in India. That has been inculcated by the society. Women have to take things in their own hands, they cannot be looking outside for their self-protection. Women need to realize that they are not the weaker sex. What we endure, men cannot even dream of doing. Mothers need to tell their daughters that their lives are not characterized by being somebody’s daughter, wife or mom. To trust one’s individuality and have the conviction to follow one’s dreams.

Maneet Chauhan was recently invited to the White House by President Barack Obama and First Lady Michelle Obama as part of the Easter Egg Roll Hunt 2014. She is an invited member of Indiaspora – an organization with the top 100 influential Indian American’s in the U.S. and sits on the Board of Society of Fellows of Culinary Institute of America.

Chef Chauhan’s ongoing research, trials, travels and zest for experimentation keeps her at the forefront of cutting-edge cuisine. Her energy and creativity, combined with polished culinary skills and the courage to follow her passion, have proven to be the right ingredients for success.

Chef Chauhan’s book, “Flavors of My World” best portrays her culinary approach—a deep pride in representing her Indian culinary heritage, as well as a love and panache of using spices in an elevated platform, while incorporating the culinary influences of her journeys and experiences.

Chef Chauhan currently resides in New York City with her husband and her daughter.