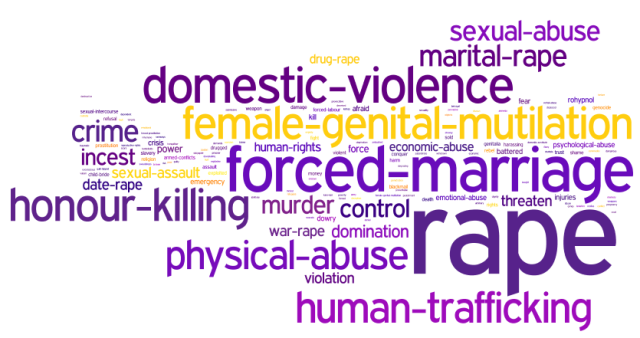 The Widespread Nature of Violence Against Women (VAW)

Before I begin, I’d like to give a couple of disclaimers. If any readers are sensitive to the discussion about sexual trauma, please read with caution. This blog post outlines the prominence of VAW in several areas of life, which may induce anxiety for certain people.

Additionally, I would like to disclose that I am fully aware that this topic is not specific to women. This issue does not discriminate. Men experience sexual abuse, harassment, trauma, and other forms of violence as well. I in no way intend to demean, ignore, or minimize that. However, I’m choosing a more myopic view for now. This post will focus exclusively on women for the purposes of this post.

I feel like that I see a lot of specialized documentaries, articles, and pieces on particular facets of domestic violence. They tend to tell pointed anecdotes that took place under a clearly defined set of circumstances; be it a survivor of a drunken assault at a frat party, a soldier in the military, etc. These stories move people, and they manage to put faces to the statistics. They reach other survivors, letting them know that they are not alone and validating their feelings.

Though sharing one’s own story of gender-based violence is a courageous display of solidarity, listening to a single account does not fully enlighten a listener. One story does not provide an accurate view of how far-reaching a disease, social issue, or condition may be. It does not express the magnitude of a problem. It also does not educate listeners on the variety of ways in which an issue can affect people of different cultures, settings, and stages of life. So instead of telling a personal story or the story of a friend, I will attempt to explain to you, readers, how much of an indiscriminate epidemic violence against women has become.

Before delving into its branches, I will first define its roots. According to UN Women, violence against women and girls is, “any act of gender-based violence that results in, or is likely to result in, physical, sexual or psychological harm or suffering to women, including threats of such acts, coercion or arbitrary deprivation of liberty, whether occurring in public or in private life.” It takes on many forms, varying based on culture, location, socioeconomic situation, among others.

To Westerners, this may bring up images of foreign countries with different standards of living and cultural mores than the United States. However, it is closer in proximity and more frequent in numbers than a lot of us realize. The Rape, Abuse & Incest National Network estimated in 2013 that 1 in 9 girls under the age of 18 experience sexual abuse or assault by an adult. A staggering 82 percent of children who experience sexual assault are girls. In these cases, 80 percent of perpetrators were parents – a statistic which is largely superior to those of other perpetrators. Other groups include other relatives (6 percent), strangers (5 percent), and unmarried partners of a parent (4 percent). Studies that followed survivors’ lives revealed that children who experience sexual violence are four times more likely to abuse drugs and/or experience post-traumatic stress disorder later in life.

Moving the conversation to adult women, the trends do not improve. RAINN claims that, as of 2016, 1 in 6 American women have survived an attempted or completed rape in her life. A whole 90 percent of adult survivors are female. Women between the ages of 18 and 24 are 3 times more likely to experience sexual violence if they are in college. And 4 times more likely if they are not enrolled in school.

Among undergraduate female students, 23 percent will experience sexual assault. 8.8 percent of female graduate students can expect the same. 4.1 percent of all college students will be stalked at some point during their academic careers. More than 50 percent of these assaults occur in ‘the red zone’, which encompasses the first few months of the Fall semester. In theory, this is because schools across the country see the highest concentration of on-campus parties during these months.

According to a 2017 NBC article, the U.S. military had 6,172 cases of sexual assault among active duty members. This is nearly double the total in 2012 when they had approximately 3600. While survivors tend to experience retaliation across the board, this pattern is historically heightened within the military community. NBC states that “Within the recent military report was an anonymous survey, conducted every two years, which found that 14,900 service members experienced some kind of sexual assault in 2016, from rape to groping, down from 20,300 in 2014. But 58 percent of victims experienced reprisals or retaliation for reporting sexual assault, the report showed.”

Clearly, there is an underlying expectation of backlash if a service member dares to speak up and attempt to prosecute. This is not to say it never happens or works out in the survivor’s favor, but these statistics are significant. This is also a principle that is applicable to any woman in any field who experiences this. If she intends to pursue legal action, she must overcome the shame, humiliation, and hurt that inevitably follows sexual assault. She might also be stigmatized, shamed, or looked down on.

In non-collegiate civilian life, domestic violence continues to be a major concern. The National Coalition Against Domestic Violence says that 1 in 3 women encounter some level of physical abuse from an intimate partner. 1 in 5 will be sexually assaulted and 1 in 7 will be stalked at some point.

This is a diverse, ever-growing group of women. They deal with a lifetime of struggle, anxiety, and confusion without having done anything to warrant such a burden. Many of them are victim-blamed. They should not have worn what they were wearing, had as much to drink, or walked down a certain street. Many will stay silent, at least for a time, to avoid repercussions. Women who do speak up tend to do so when they feel inspired or supported enough. When they feel they are not alone. When they feel someone else might benefit from hearing what they have to say.

For any readers out there that may have survived some measure of gender-based violence, I hope you have read to this point. I hope that, if you take anything away from this article at all, it is that you are far from alone. For me, this realization has been both relieving and devastating. They win when we feel isolated. When we feel isolated, we seldom speak up or fight back. We become our own worst enemies and refuse to forgive ourselves for actions that were not our own. We forget who we are and allow these things to define us, but they do not. Remember there is likely someone else in any given office, classroom, base, event, or neighborhood.

However, this also means that so many other people have had to feel this pain when no one should ever have to. This means that violence against women truly does span our state, our country, our continent, and our world. This post does not discuss female genital mutilation, acid throwing, or the myriad other manifestations of violence against women worldwide. That being said, I encourage you, readers, to educate yourselves further. These things affect all of us – not just survivors. These are affronts to all women. This means a lot of people we share a planet with believing we are worthless. That this kind of behavior is acceptable. The solutions to this are education, knowledge, and support.

Show support to survivors. Self-advocate. Unite together and remember who you are.

Here are some resources for anyone that is in crisis, needs a safe person to talk to, or wants further reading: