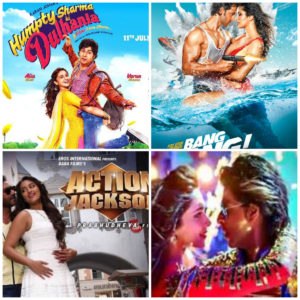 In an outlandish scene in a treacherously banal film called Happy New Year released last year, lead actress Deepika Padukone listens naively awestruck as her co-star, popular Hindi film actor Shah Rukh Khan, taking advantage of her limited knowledge of the English language, makes vulgar comments any woman would be outraged at. Padukone who interestingly made headlines last year for standing up for herself as a self respecting, liberated female when a leading Indian newspaper tweeted inappropriate pictures of her seemed to have no qualms with this obvious insult and regressive portrayal.

In another ‘young and cool’ film of the year Humpty Sharma Ki Dulhania, current darling of the nation Alia Bhatt plays a girl whose only ambition in life is to get married in a ‘Kareena waala lehenga’.  Also interesting, following on the lines of several recent releases, was the film’s yardstick of a female’s cool quotient in life. She has to, not just not mind, but endorse drinking and dancing with men she barely knows in the middle of the night at a place she has never been to before. Besides helping one of them sneak examination papers out of her uncle’s house who happens to teach the guy. In another disastrous offering called Bang Bang, lead actress Katrina Kaif didn’t mind being tossed around worse than a rag doll by men with way too many motives to keep count of. She seemed to have no mind of her own in a film that didn’t have one in the first place. All we were told was that she was ‘hopelessly in love’ after having begun to question the very meaning of her existence owing to her long held singlehood.

Kareena Kapoor with zero self respect in Singham Returns or Sonakshi Sinha without the remotest idea of the same in Action Jackson, these were a few female performances last year that should have left us ashamed and wondering what our leading Bollywood ladies have been thinking.

To be fair, films like Mary Kom and Queen did provide a glimmer of hope. But in a country and industry rapidly touting their respect for women and recognition of issues that relate to their empowerment, there were a couple of takes on female sensibilities that left us looking for cover. But what’s sadly problematic isn’t just that we choose to make these films and write these characters. It is also that these populist faces agree to play to the gallery and do these roles inviting the catcalls and whistles. It would be no exaggeration to say that actors like Deepika Padukone and Katrina Kaif are looked upon as role models for an entire generation of girls in a nation where film celebrities are hero worshipped and everything from their clothes to their lifestyle choices are emulated. Their words, actions and decisions make headlines and shape opinions. What example then do they set by agreeing to play props in films that are based on gender stereotypes and insults? And how long will they bask in the glory of being part of films that, albeit successful, mock their own sensibilities?

When a Divya Khosla Kumar makes a Yaariyan with a song that goes ‘Kudiyon ka laga hai buffet’, it’s not as sad as when a female director like Farah Khan makes a Happy New Year with a Deepika Padukone. It’s just sadder that she puts her name first in the credit titles as ostensible support to friend and superstar Shah Rukh Khan’s active endorsement of female empowerment but does zilch to make a strong statement about the fact that women can stand up for themselves on screen as well. They are both horrifying facts but we might not expect the same amount of sensitivity from something as out rightly frivolous as Yaariyan as we do from the big names behind Happy New Year.

The idea is not just to make better films. The idea is also to be true to what you otherwise go to town preaching because cinema today both reflects and influences society. And perhaps it wouldn’t be too unfair to say that the onus, before anyone else, lies on these female artists themselves.