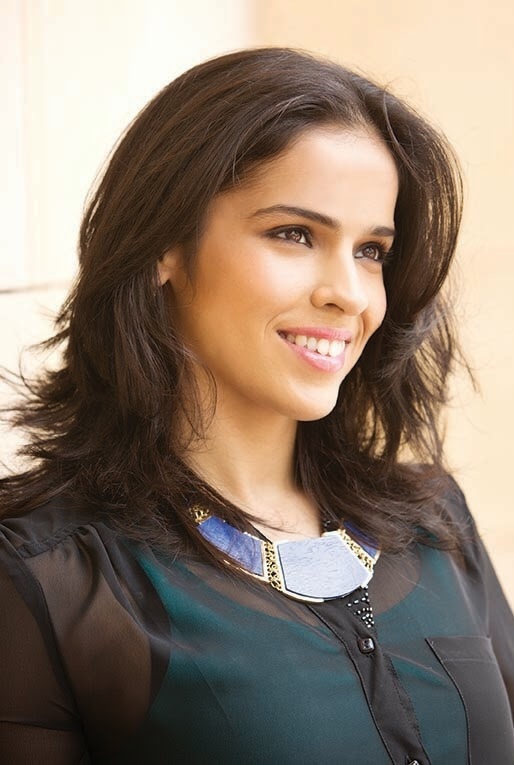 Saina Nehwal is India’s ace badminton player. She is the first Indian to win a medal in Badminton at the Olympics. She achieved this feat by winning the Bronze medal at the London Olympics 2012. A brown belt in karate, Saina has won numerous awards including the Arjuna award in 2009, Padma Shri 2010 and Rajiv Khel Ratna Awardee in 2010.

Tell us more about yourself and what put you on the path of badminton? Describe a typical day in the life of Saina Nehwal.
I’m a badminton player from India. My parents come from Hisar, Haryana. They moved to Hyderabad in May 1998 when I was barely 8 years old and studying in 3rd standard. I was a Hindi speaking girl and landed in the erstwhile state of Andhra Pradesh, a Telugu speaking area. My parents enrolled me in judo classes where language was not a barrier, only actions mattered. That blessing in disguise made me a player. My parents were badminton players and took me to a badminton summer training camp at LB Stadium in Hyderabad in May 1999. I met great coaches like Nani Prasad Sir, S.M. Arif Sir, Goverdhan Reddy Sir, Pullela Gopichand Sir and Bhaskar Babu Sir. They molded my career as a badminton player. It takes a lot of time to play professionally, but with my training, I became the under 10 champion of the state in the same year. This encouraged me to continue pursuing the game. In 2002, I became the under 13 champion of India and was selected in the junior team of India to play in Europe. In 2003, I won an international tournament held in Prague, Czech Republic in the under 19 category. Presently I am training with U. Vimal Kumar Sir.

I start my day with light exercises to warm up my body followed by 2-3 hours of training on the court under the guidance of my coach. Training is followed by lunch, which is usually a typical north Indian meal of two chapattis, rice, daal, a seasonal curry and a glass of yoghurt, followed by a short nap. I train for another 2-3 hours in the evening as per the schedule prepared by my coach followed by a light dinner, watch television and then go to bed. This is my schedule for six days a week. Sunday is my rest day; I usually do some light exercises at home, sometimes watch movies and sleep. When I am in tournaments, my schedule changes accordingly.

What are some of the challenges you faced in your chosen career and how did you overcome them? Did you ever face sexism, sponsorship issues or prejudice as a female athlete?
Luckily I have not had to face such challenges thus far, except some issues relating to financial sponsorship in the beginning of my career. There was a need for a lot of funds, due to the need for air travel with a family member, sports gear, clothes, hotel stays etc. However, Mittal Champions Trust followed by Olympic Gold Quest and the Government of India came in a big way to ease my financial matters.

Later, many sponsors like SAHARA, Deccan Chronicle, Usha International, other corporate houses, etc. came forward to help me as well. I have also received a lot of respect in sports as a female player and never faced any discrimination. I was a part of the Indian team since the beginning of my career. All younger players respect me and I have a lot of respect for my seniors. I have been fortunate to have the support of my parents, coaches, administrators and the patronage of the public since the very beginning of my career. Most of all God. The Government of India has identified few players in the men’s and women’s categories and I am one of them. Good coaching facilities have been provided, good coaches have been arranged (Indian and foreign) and international travel is taken care of by the government and the Badminton Association of India. Although, personally, I have not faced discrimination, I hear about prejudices against women in the media every day and fear for them.

Most sports in India are male dominated, a women sportsperson such as you is a great inspiration for many young girls and women. What in your view is the contribution of sports to a woman’s life?
There is dominance of men in certain sports but now things are changing. For example, women wrestlers are doing great. For a person who is dedicated, sky is the limit in sports. Aim high! It has been scientifically proven that playing sports, exercising and staying active keeps a person’s body and mind fit. With effort, it is possible to balance education and sports. For example, a medical student can play for universities at international level. Sports provides me with a great sense of accomplishment and I have received awards from the Government, endorsements, financial assistance in addition to being employed at BPCL.

Tell us about your most significant accomplishment in your career. What advice you would give to kids today who look up to you as their inspiration
Winning a tournament is an accomplishment. I always aim to win and perform my best. Nothing is impossible if there is a strong desire to succeed. Believe in actions and respect your mentors. Hard work, dedication, parental love, support and guidance helps me stay focused.

Some of my major accomplishments are being the first Indian to win a medal in Badminton at the Olympics (London Olympics 2012) and also the first Indian woman to win a Gold medal in the Women’s Singles Badminton event in 2010 Commonwealth Games held in New Delhi. I have also won a Bronze medal at the Asian games 2014 at Incheon, South Korea.

According to you, how does the constant tussle between motherhood and/or family and career play out for a sportsperson? Have you ever felt pressured by the expectations your family/society may have from you as a woman?
There has been no pressure from my family in terms of expectations as a woman separate from being a sportsperson. I believe motherhood will come at an appropriate time and allow nature to take its course. I respect MC Mary Kom, who is a mother and a gold medalist in boxing.

On a lighter note, what are India’s chances in badminton in RIO 2016 Olympics?
This is something difficult to predict. It is based on performance and realities. Participation for the country is the top most priority. Results will follow if you deserve it.

What is your idea of an empowered woman?
I believe women are equal to men in every aspect of life. We have to work towards eliminating poverty, strive for education and awareness about women’s empowerment. This will lead to equality over time.

Sayfty’s mission is to Educate, Equip and Empower women so that they can protect themselves against violence. What is your message for our readers related to women’s personal safety and the issue of violence against women.
It is true that every day you see atrocities committed on women in one form or the other; it is unsafe to walk on the streets in the night, domestic violence, dowry issues, rape, and prejudice about what women should or should not wear. My thought is that women should remain positive, pursue happiness and do the best wherever they are.

Arjuna award in 2009, Padma Shri 2010 and Rajiv Khel Ratna Awardee in 2010. Winner of Gold Grand prix tournaments in India (3 times), Swiss (2 times) and once in Philippines, TaiPei , Thailand and  Malaysia (runners up).

These 20 titles are equivalent to World Championships as they are all world open tournaments. While her formal education is up to 12 standard, she was awarded D. Lit. honoris causa by Mangalayatan University Aligarh in 2012 for excellence in sports.

She is currently employed in a Govt. Of India  Undertaking oil company – BPCL as Deputy Manager Sports, a managerial level post .Saina Nehwal is the author of Playing to Win, published by Penguin India in 2012.