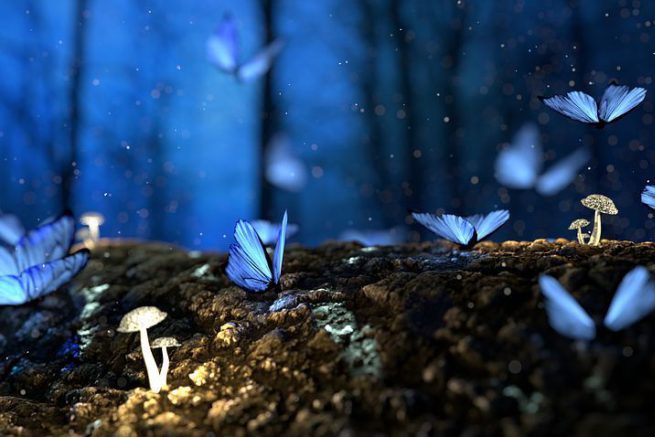 Becoming a butterfly The egg of the butterfly is hidden away, under a leaf, until the caterpillar growing inside is ready to come out.

You never know how life is going to turn out. My young life was full of potential, although I didn’t know it at the time. Things happen that change your view of the world. The church I attended preached a misogynistic world view. As a woman, I was second class, second rate and only there to be used/abused by men.

And I was. I was bullied constantly at school – and never fought back. My boyfriend at the time treated me badly. He took what he wanted from me, and never gave back. I thought this was love. He left me and I didn’t see him for 10 years. Then one day we meet by chance. I’d moved on, gotten married, was studying to better myself. I invited him into my home – for a coffee and chat, nothing more. We never had the coffee or the chat.

The caterpillar is at first very small but rapidly grows with constant eating, shedding its skin many times. It is camouflaged, is constantly on the move and tries to stay out of danger – not even knowing why.

The Story of My Rape

You see, when he was in my house, he took me and raped me. I didn’t fight back, I didn’t say no, I didn’t say anything. My survival instinct took over and I just did what he wanted so it would be over quickly, so he would leave faster. (So he wouldn’t kill me.) He made me strip. He made me suck him off. He called me a whore. He took me to bed. When I tried to push him off, he pinned me to the bed with his arms and legs. He bit me and bruised me, but I wasn’t there.

I had left my body for him to do what he wanted, but the real core of me escaped into my mind. I don’t remember what else he did, I only came back to my body as he was getting up. Afterward, I didn’t call it rape. This was someone I knew, that I’d loved – not some stranger. This was my own home, not some alley. This was broad daylight, not midnight. I, instead, called this an affair. A few weeks later I nearly committed suicide. I was 27. I had a secret and I couldn’t tell anyone.

For the next twenty years, I lived in constant fear that he would come back, that people could see it on me, that I was a slut who deserved everything she got. When I was outside, I held my keys between my fingers. I was on high alert, constant surveillance, looking to see where each person was around me, where my exits were, where the nearest shop/office/pub was for safety.

I Didn’t Accept The Rape … for Twenty Years

Twenty years. That’s how long it took for me to realize that this was rape.

Inside the chrysalis, locked away from the world, the body of the caterpillar is broken down in order to be rebuilt.

I found a psychotherapist and began the long work to rebuild myself. But before that could happen, I had to realize and accept deep down, at heart level and not just head level, what he’d done to me. To relive the events and see how none of it was my fault. To see how I could not have stopped him and that it really wasn’t my fault.

It was not easy. There were many sessions where I felt indescribable pain with no hope of an ending. I had no hope that things were going to be better than this. But, I couldn’t go back now. You can’t unknow something. I had to continue, though. I had to go through the pain, and the memories, and the feelings. The feelings were the worst. To feel again the hopelessness and helplessness I had felt at the time – but this time, I am not alone. My therapist is there with me telling me how brave I am. That I survived. That my instincts kept me safe. That he didn’t win. That I won.

Breaking out of the chrysalis, the butterfly’s beautiful wings expand and, after a few test beats of the wings, it flies away.

It took two years of weekly sessions for me to finally be able to feel with all my heart that I am not to blame for his wrong-doing against me. I am ready for the next adventure in life. I am ready to leap into the unknown and fly, now I’ve broken free from all that held me down. I am now free to be the person I was always meant to be. I know that there will still be times when I’m back in that room and I feel again the shame of what happened. This happens especially when I read or hear someone else’s story.

If You’ve Been Raped, Know This: You Are Not Alone

You see, I understand the horror and pain such a story has, but I also know how to fight those feelings now – by accepting them as reminders that I survived. If you’ve been through similar, know you also survived. You are not alone. I and others know how sexual abuse and rape can affect your life. And I know, even though I have not met you, that inside all the hurt and pain and shame, there is a beautiful butterfly waiting to emerge.

Reach out and find the help you deserve.

Pandys.org – a great online forum who have been really supportive, especially when I’ve had no other support available.