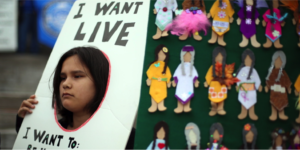 Violence Against Indigenous Women and Girls

The United Nation’s Secretary-General’s UNiTE Campaign to End Violence against Women has made the 25th of every month #OrangeDay. Today’s #OrangeDay, April 25th, focuses specifically on Violence against Indigenous women and girls.

Some statistics reported by Carrie Bettinger-Lopez regarding indigenous women violence are:

Indigenous populations have not disappeared since times of colonization. They are just silenced and forced to live without equal access to resources and services. The fight to educate the public about their struggles is continuous and needs exposure in the mainstream media.

According to Futures Without Violence, Native American women are 2.5 times more likely to be raped or sexually assaulted than other women in the USA. Indigenous women have less access to social services, healthcare, and justice against their attackers.

It’s questionable why this issue isn’t prevalent in the mainstream. Indigenous women are often subject to gender-motivated killings in Latin America. They face higher rates of violence and murder than women in general. This is not a trend in one country, it’s a big problem and must be addressed immediately. The oppression of and violence towards indigenous women can’t continue any longer.

Transitioning to a system that better accommodates indigenous women isn’t difficult. Applying a multicultural approach in services for victims of violence is a way to cater better to the cultures of the victims. Victims will be handled better if health care services change the treatment styles used to provide assistance to indigenous populations. Building relationships between governing bodies on indigenous land and the state government will ensure that all parties work together to end this issue.

States must work together to ensure that indigenous women should no longer live in fear. The difficulty comes from jurisdiction relationships between federal, state, and tribal laws. Amnesty International states three main factors that determine where the crime will be dealt with:

Increased cooperation between federal, state, and tribal governments will ensure that violence towards indigenous women decreases. This step towards ending the violence is imperative. Many cases are not properly dealt with because of lack of cooperation. This furthers the problem instead of ending it.

Living as a woman is hard enough, there is no reason that indigenous women should suffer more because of the oppression their cultures have faced for centuries.