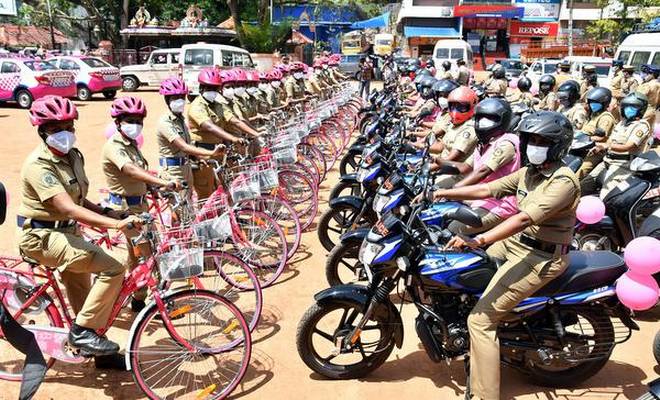 Recently, Kerala launched a new project – Pink Protection Project for women’s safety. Chief Minister Pinaraya Vijayan announced this new scheme in order to protect women in public, private, and all digital mediums. It is important to elucidate the necessity of this campaign within Kerala. During the 2020-21 lockdowns, with greater restrictions in place, domestic violence cases grew by leaps and bounds. While only 75 cases were reported in April 2020, within two months, it increased to 600 cases.

With the increase in dowry related cruelities and other violence against women and girls, the government introduced the project. Seventy vehicles containing twenty bicycles, forty two wheelers, and ten cars are assigned to the project by the Chief of Kerala, Pinaraya Bijayan. A change is necessary and this is the way

Domestic Violence still remains a grave problem in India – affecting women across the country. Because of the stigma and tradition of marriage in India, families do not support their daughters leaving an abusive marriage – especially in cases if they have children. And during the pandemic, with the lack of transport, women could not even go somewhere safe like their parents’ homes or a woman’s shelter.

Data was examined utilizing content analysis and three themes like the three parts of RAT – motivated offender, absence of capable guardian, and suitable target. Findings indicate that lack of employment mixed with alcohol were the main culprits. The symbolic worth that perpetrators relate to women, visibility, lower inertia, and the accessibility to these men created women as the easiest targets. Additionally, there was a lack of police forces and many travel restrictions. This created an unsafe environment for women and hence a rise in cases.

Fourteen Kerela state districts have pink control rooms that are controlling the activities in the project. There are an entirety of ten components of this project. Under the system called “Pink Janamaithri Beat,” the protocol for the police is for them to oversee house visits to accumulate information on domestic violence from the locals, neighbors, and panchayat members. This information is then sent to the Station House Officers.

The Pink Beat system engages specifically trained women police officers. They are deployed and present in public spaces such as bus stops, colleges, etc. One of the other components is the “Pink Shadow Patrol” team. It focuses on identifying the appearance of anti-socials in public crowded areas to take action. Additionally, there is the “Pink Romeo” – a bullet patrol team of women officers.

There will be regular patrols by police officers to ensure safety of women and girls. There will be wireless communication to all Pink control rooms to easily communicate information.

This project provides a helping hand to the society. It is leading by example that there need to be preventive measures in this country that safeguard women from their own abusive households or the society in general. Sadly, domestic violence is a shadow pandemic. Across the world we saw an increase in violence. For example, there was an increase of 8.1% of violence in the United States. A Beijing NGO which centers around tacking violence against women had seen a major increase in calls to the help line. In Spain, the emergency number for domestic violence had 18% more calls than usual in the preliminary two weeks of lockdown in comparison to the same period a month earlier. In European countries like Italy, France, and Spain, after two weeks of increased calls, countries turned to makeshift hotels into shelters for victims of violence. Regular shelters had too much of a risk of infection.

Many women facing abuse don’t speak out. They doubt implementing these protocols will decrease the violence against them. A civil police officer, Anju, commented, “There are a lot of people which cannot be revealed to anyone. This project aims to reach such people and listen to their problems, make them aware, and provide basic legal help to ensure women’s safety.” Kerala’s implementation of this project demonstrates a step forward in the current climate of India, but it is not enough. However, similar to other preventive measures that countries like the UK are starting to implement, we need a long-term solution. An equitable world is one where women do not feel the need for protection. They feel safe in all aspects of life.

If you or a loved one is experiencing domestic violence, there are several tools for help. Sayfty has a Survivors Toolkit specifically curated for survivors of sexual assault in India. It aids survivors and allies through knowledge of how to take care of one’s mental health and how to steer through the legal, medical, and alternate systems. It’s created by experts and other survivors to fully comprehend all the procedures.

Additionally, The MyAmbar, app supplies women with helpline numbers and services provided within the country. It has a step-by-step risk assessment tool that provides guidance to women for dealing with their situations. Women can contact legal and counselling services. It is in both Hindi and English.

You are not alone. If you need help, please use these tools.

Kashish Singh is a Psychology student at King’s College London. She has worked on multiple projects surrounding gender discrimination for the last 4 years and wants to continue to spread awareness within her community. Here is another interesting blog on the vaccine gap by Kashish