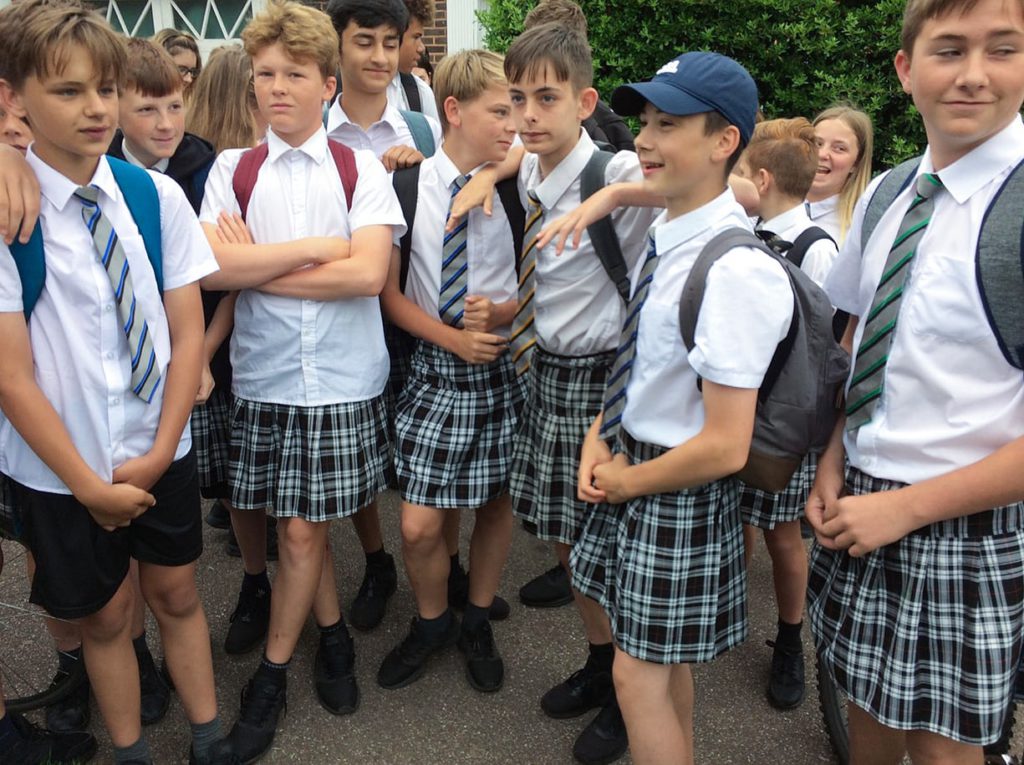 Uniforms and Dress Codes Are an Excuse to Police Young Boys and Girls!

As a school going kid, I’ve always wondered about the requirement of uniforms. Schools in India require students to wear uniforms specific to their assigned sex. Girls in my school were required to wear skirts, whereas boys were mandated to wear pants. I remember my principal emphasizing the importance of “discipline” that uniforms bring to the student body. I always wondered how a piece of clothing can discipline you?

The crux of the discipline, I realized, lies in the gendering of uniforms. Skirts are meant to highlight a girl’s femininity, while pants enforce a boy’s masculinity. Differentiation of uniforms according to assigned sex enforces the gender stereotypes prevalent in society! Parents buy young girls pink frilly dresses and barbie dolls. On the contrary, boys get cars, trucks and dinosaurs to play with. In this manner, kids are taught to be the perfect versions of their “gender.” A perfect woman is the epitome of femininity, whereas a man is one of masculinity. Likewise, educational institutions continue to enforce ideas of perfect men and women through gendered uniforms.

The talks concerning gender and gendered uniforms call into question the distinction between gender and biological sex. According to World Health Organisation, “gender refers to the socially constructed characteristics of women and men.” These include cultural norms and the relationship between the two sexes. Hence, gender is constructed within society when a child is socialized to the established norms. Consequently, he adopts the norms and stereotypes of the gender linked to his particular gender. Therefore, the association of skirts with girls and pants with boys promotes gender stereotypes among young children.

Furthermore, gendered uniforms allow institutions to police students. The length of girls’ skirts is often looked upon. Teachers link a girl’s morale with the length of her skirt. They discipline her body, while simultaneously enforcing a feminine stereotype. I remember my school called the girls into the auditorium for a bloomer inspection. Yes, my school loved to enforce gender to the extent that they called cycling shorts worn under our skirts “bloomers.” As the girls were rounded up in the auditorium, the teachers instructed Prefects to lift up our skirts to affirm that every girl was indeed wearing her “bloomer.”  Who cares about the invasion of privacy? The more important issue was boys taking a peek up a girl’s skirt. Was my school called out for this heinous act? Of course not! They were merely attempting to “discipline” us.

What about schools that don’t prescribe a uniform?

Schools that don’t mandate uniforms, enforce a dress code. These stringent codes regulate the clothes worn by young men and women. A 6th grader from Portland was scrutinized for a dress code violation. Molly Neuner was called out for wearing a racerback-style purple tank top. Molly did not let a sexist dress code bring her down. Consequently, she returned the next day wearing another tank top with #iamnotadistraction written on her forearm.

It’s not just the girls!

Isca Academy’s boys were not permitted to wear shorts to school. UK’s soaring summer temperature did not excuse the uniform. The school refused to bend the uniform code to allow boys to wear shorts. They sarcastically claimed that boys could wear skirts if they wanted to. And so they did! Uniforms don’t just police girls, but also dictate what boys can wear. The bold move by the boys at Isca Academy quashes gender norms enforced by uniforms.

There are schools like mine that impose a strict uniform or dress code. However, several schools are reforming their dress code and uniform policies. At least 120 schools in UK have signed up for gender neutral uniforms. Among these schools, primary schools primary schools seem to be in greater numbers. To enforce gender neutral uniforms at younger ages helps to steer young minds away from specific gender norms and stereotypes. Hence, one can only hope to see more schools implementing such reforms that quash societal disciplines!