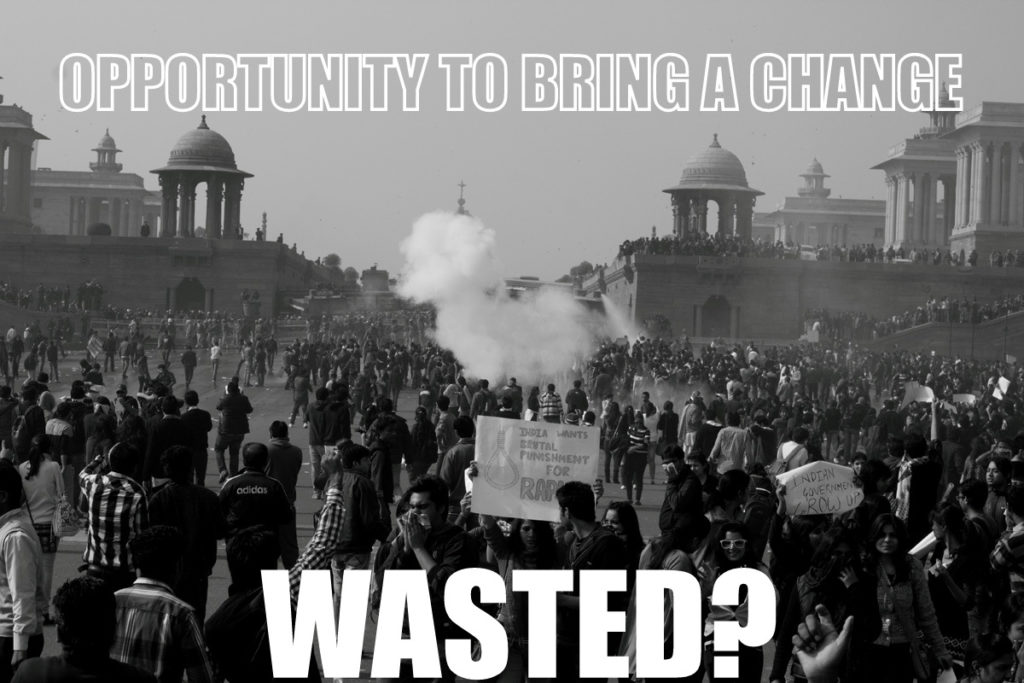 22nd December, 2012, saw one of the biggest protests in the history of modern India. On a cold winter morning, thousands of young boys and girls got together near the India Gate to march up to the Rashtrapati Bhawan via the Raisina Hill. As the morning progressed, they were joined by more people of different age groups. The protest march was organized for people to express their anger and disappointment against the brutal gang rape that took place on 16th December, 2012. This wasn’t the first gang rape in India or in Delhi and this was certainly not the first time a woman had been abused, violated and left to die on the roadside, naked. Was the turnout a result of the exaggerated and reiteration through the news channels? While the English news channels went for conventional debating which never leads to any conclusion, the more emotional Hindi news channels recreated the entire incident to cash in on the TRP. One way or the other, the nation had been moved.

Unfortunately, the protests turned violent and the people and the government blamed it on the presence of some political elements who wanted to use the incident to gain advantage in the next elections. Media channels covered young boys and girls asking senior ministers to come out and make a statement. All they wanted was someone from the ministry, to come out and ensure that some quick action was going to be taken. If President Obama could, why not prime Minister Manmohan Singh or the so called youth icon Rahul Gandhi?

The one question that needs to be answered is… what led the people to come out and protest? Had the nation had enough? Was it time for women suppression to end? Were those protests against the corrupt system, weak force or just a result of an emotional outburst?

Over the next few days, pages and handles on social media came up with great reform ideas, laws, and governing methods. Media channels hosted their own trials and fast track courts were setup but the rape victim could not hold on and lost her life.

Over the next few weeks the Prime Minister had a post on his Facebook page inviting the subscribers to suggest reforms and laws for rapists. In a few months the Justice Verma Committee presented a 600 page report but sadly it wasn’t even read by 10% of the Lok Sabha members. Now the Media channels had other interesting stories to cover and were focusing on Sreesanth and his shopping list. What started a few months ago as a potential revolution, now met a dead end.

A girl in India doesn’t have a long wish list. She wants an opportunity to live although she is a girl, then an opportunity to attend school and acquire education. She wishes for equal opportunities to learn and grow as any other male. As she grows up she wishes for a safe and free surrounding where she doesn’t feel threatened, victimized or abused.

But in India, all a woman gets is free lectures and advices! Lectures on how her grooming is necessary to run a house after her marriage, lectures on when and with whom to go out. These days, if she goes to a protest, she is tagged as dented and painted. If she is being raped, she is advised to try the ‘bhaiya’ formula. Everything is always pinned onto her and as a popular online video says, it’s her fault.

Rapes cannot be stopped with laws, tough police force or even sentencing the rapist to death. Media trials are absurd and so are their non-conclusive debates. Rape is not a problem of women or men but of the entire society. The way the society thinks needs to change and the change needs to start at home. Rape is not an independent problem but a part of the bigger problem, which is suppressing women. The day we start acknowledging the fact that women are also human beings, we might see more educated, self-dependent, confident women and more empathetic men and society.

Many of these points may have been overlooked in all those TV debates. Rapes are not going to stop any time soon in India and the reason for that is not only the corrupt system, the indifferent government, the fast yet slow track courts, lack of awareness and absolutely no education but the mindset of the Indian society. We cannot bring down the number of rapes till be don’t act against women suppression and the hypocritical social norms. Some might argue that the change is coming, slow but it is on its way. My question to all of them is that we have already wasted 60 years, how many more years are we going to waste?

Recently the sentencing in the Delhi Gang rape case came through with the juvenile being sentenced to 3 years in prison whereas the other 4 being sentenced to death. The 6th and the main culprit had been suspiciously killed in prison 2-3 months back. Was justice served? Has this stopped rapes in India? The answer is NO as we have several rape cases published in the media even after the sentence and many more that may have gone unnoticed.

The feminist movement could have led to great changes in the society, it could have moved the nation, and it could have liberated our female population. But for now, all it has done is give our drama shows an interesting story to recreate at least 10,000 times, our media channels the independence to hold trials and perverts the continued guts to rape. It failed to give anything back to our fellow women.