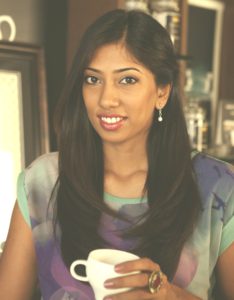 Tell us more about yourself and what you do.
I am a filmmaker and anchor who sometimes is also a marketer, is definitely an entrepreneur and was once a researcher and model. And, oh, I was also for a short period in academics and I loved it. That’s not to say I didn’t love the rest of the things I did, but I best love what I do now. Entrepreneurship.

Chai with Lakshmi was born out of my need to express, connect as well as put to use my research and anchoring skills. And in going out on a limb and creating this talk show, I discovered how truly creative I was and capable.

What challenges have you had to face? How did you overcome them?
I think film-making in itself was new to me even though I’d had some exposure to it in the past. This was overcome when I hired my first employee – who is still with me and I hope will continue to stay with us – who was technically very strong and a very dedicated person. The second problem was money: this is a self-invested business and there is only so far personal money can go. Parents and friends helped much. The third problem was the demanding nature of entrepreneurship itself and here the magical optimism my soul sister had about this pursuit gave me the faith to continue and that in turn helped me learn perseverance – a much needed attribute for entrepreneurship.

From consulting and teaching to being a model, entrepreneur, producer, director and anchor. Are there any new projects that you can talk about?
Ah, well… apart from awesome videos that we continue to make for Chai with Lakshmi (India’s first award-winning online talk show with over 30,00,000 views), there’s this film we just completed on a business that is providing affordable clean drinking water to hundreds of villages in Orissa, a 14-part series we are developing for Dell and more. We also just launched a new website at www.lakshmirebecca.com and will be launching another in a couple of months that is dedicated solely to inspiring people from India.

What is your idea of an empowered woman?
This is a difficult one. The definition of ’empowerment’ depends much on our own contexts. Notions of success and failure are relative, so is the case with empowerment. But in the simplest of terms it is perhaps the gift of information and the freedom to make a personal choice.

For a middle class girl like me who came from a religious and conservative home it was a number of things… the joy of riding a motorcycle, of leaving home and living on my own, of experimenting with another religion, of having the choice to recover from a bad divorce and starting life all over again, of having the opportunity to study abroad and empower myself with cultural knowledge as well as a deeper sense of confidence… it was having the freedom to start a business and it is having the freedom to write all this just as I am.

Message for our readers related to women’s personal safety and the issue of violence against women.
This is a difficult subject with many aspects to it. Not because it is simply to do with violence and safety and there if much going on at the moment that is scary, but because it has to do with gender and in India there are many identities and ideas associated with gender depending on where you belong or come from. If one were to strip it down and identify the problem as being the lack of respect towards women and the presence of sexual mis-directedness, then the solution lies in inculcating respect amongst everyone – men and women – towards women, and about encouraging a healthy attitude towards sex and sexuality – through education, nurture as well as culture. Our problems cannot be fixed by looking at the present alone, but by looking into the future.

Bio
Lakshmi Rebecca runs India’s first award-winning online talk show called ‘Chai with Lakshmi’, is the founder of Red Bangle – a film production house based in Bangalore, and is the maker of the YouTube series, ‘India Ahead’. She is also a blogger.
Chai with Lakshmi, which features peoples and ideas positively shaping India for the future, recently became a WSA nominee (a UN initiated award for the best in global e-content).
Red Bangle, Lakshmi’s production house, has made nearly 300 films which range from Ad films to corporate films.

In her previous avatar Lakshmi was a researcher who contributed to documentary films for the BBC, Discovery and Channel 4, was a marketer who undertook a considerable number of market research and consulting projects, and was a model who worked with some of India’s renowned designers and brands. Lakshmi is a qualified marketer from Sheffield Business School, UK, where she also researched and taught marketing.

When not at work, you’ll find Lakshmi sipping tea, catching up with friends, reading a book, dreaming about the next yummy thing to eat or playing board games. She also loves a fine glass of South African Sauvignon Blanc and traveling.

Find out more at lakshmirebecca.com