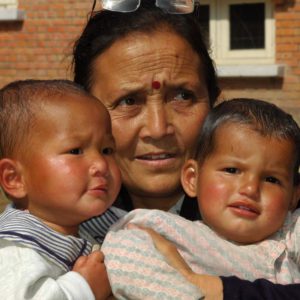 Anuradha Koirala is the founder and director of Maiti Nepal – a non-profit organization in Nepal, dedicated to helping victims of sex trafficking. She won the CNN Hero of the year award in 2010.

Tell us more about yourself and what you do.
I consider myself to be an ordinary woman. I feel and react to circumstances just like any other woman. The difference is how I react to specific incidents, events and conditions that surround me. My surroundings and circumstances inspired me to work for others and to care for their welfare and safety. I was born in a pious family where social work was actively encouraged and this culture at home motivated me immensely to pursue my passion towards social work. I was encouraged by my grandfather to take up social work. He would often cite examples of Mother Teresa and her selfless dedication. Her examples left a lasting impression and inspired me to follow her path as a social worker. I have dedicated my life towards the prevention of sex trafficking and have thereby contributed to creating a society free from trafficking of children and women. This has now become my mission and this vow to eradicate sex trafficking has a lot to do with my childhood upbringing and family culture.

I love to sing and dance when I am in the mood. Sometimes people have presumptions about me because of my fame, awards and reputation, but I think of myself as a simple woman who wants to ensure that nobody around her is trafficked for commercial sexual exploitation or victimized through other forms of violence.

What has been the most defining moment of your life that shaped your mindset and paved the way for human trafficking activism?
I was a teacher before I started Maiti Nepal. Although, democracy was restored in Nepal (in 1990), it was only the elites who benefited. The condition of the women belonging to the marginalized/ethnic sections of the society remained the same. They were trafficked for commercial sexual exploitation, became victims of domestic violence and were heavily discriminated by the society and their own families. The unequal power structure in relation to their male counterparts further kept them in high perils of violence.

Although there were many NGOs, the problem of human trafficking was enormous. The state was almost mum about the issue despite the gravity of the problem. I pledged to safeguard the rights of women and children and committed myself to being an activist against human trafficking

What major challenges and problems did you face? How did you overcome them?
The challenges were countless! I drew immense energy and inspiration from the women and children I worked for and this helped me overcome many challenges. It is not an easy task to continuously fund and sustain an NGO. To give you an example of the difficulties I faced, Maiti Nepal was started with only two rented rooms. The rooms were used as an office during the day and shelter at night. There was acute shortage of funding and on many occasions, I sold my personal belongings to run the NGO. But I have no regrets about this. For me bringing happiness to the women and children I work for is more valuable than my personal belongings.

What was your inspiration behind starting Maiti Nepal?
I used to visit Pashupatinath, a Hindu temple centrally located in Kathmandu valley. During these visits, I encountered many women who had heartbreaking stories. Some of them were trafficked survivors, some divorcees, some had been raped and many were destitute. They were all illiterate and naive. I felt that if an educated and aware woman like me would not speak for their rights, nobody would extend a helping hand for these ill-fated women. I thought of setting up an NGO to work for the rights of these women. They thought of me as a mother who would always care when her daughters are in trouble. As Maiti means mother’s home in Nepali, I registered my organization as Maiti Nepal.

What is your idea of an empowered woman?
An empowered woman is one who is not only self-secure but is also able to provide safety and security to the people around her. She has the potential to influence and bring positive changes to her immediate surroundings, her society and the state. She is well informed and proactive in all aspects – social, economic, political and legal.

Message for our readers related to women’s personal safety and the issue of violence against women.
In many occasions, violence against women is the result of unequal power relations between men and women and it is mostly influenced by the gender roles. In Nepal, patriarchy and feudal culture has posed a threat over women’s safety, rights and dignity. This may be true to some extent in many other societies. Violence against women is a severe violation of human rights and it is in many cases catalyzed by women’s submissive nature. In order to guarantee safety and minimize violence, women should speak for their rights irrespective of stereotypes and traditional barriers. They should emerge as leaders and not behave as ladders.

Anuradha Koirala won the CNN Hero of the Year award in 2010 for her relentless contribution in the campaign against human trafficking. Her accomplishments have been recognized through 34 national and international awards. Due to her persistent struggle, Government of Nepal recognized 5th of September as national anti-trafficking day.