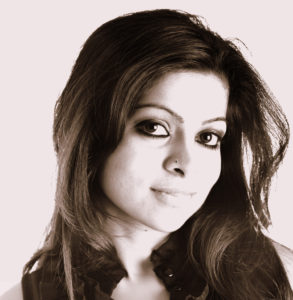 Priti Menon is an Indian vocalist born and brought up in Mumbai, it has been her life long dream to become a playback singer for Indian cinema. “Hearing my voice on the big screen and seeing actors miming my songs gives me a special feeling”, says Priti. Her wish is that she lends her voice to  the famous music genius A.R. Rahman‘s  song,  and says that she won’t give up on that dream.

Tell us more about yourself and what you do. Can you talk about that one defining moment when you knew you wanted to be a singer?
Being born in a family that has practiced music for generations, it was natural for me to embrace music at a young age. I trained in Carnatic music for over twelve years before moving to UK to complete my education. I earned my masters degree in Psychology from Middlesex, after which, I took up a full-time job as a mental health worker taking care of people who suffer from numerous long term mental health issues. My exhausting work life drove me back to my childhood vocation- singing, which still provided me the biggest release from work. It was because of these frequent singing sessions that it slowly began to dawn upon me that singing was my passion and so I began to hunt for opportunities to showcase my talent.

Within weeks, I came across an online singing competition, Sa Re Ga Ma Pa by Zee TV. I participated, and won. This win bolstered my confidence and led me to become a professional playback singer. In the years that followed, I sang  for a British Tamil feature film and collaborated with renowned artists such as Benny Dayal, Arjun and Kishan Amin who have a couple of million hits on YouTube and performed live with eminent musicians such as Bally Sagoo and Niraj Chag.

I am glad I gave it a shot!

Asian female classical singers in London are far and few, so this gave me a rare opportunity to establish and create a name for myself. I have a better chance to stand out with my Hindi diction here. People may feel I got lucky but they don’t understand the struggle behind it.

What major challenges did you face? How did you overcome them?
The biggest challenge I face is being a single woman in this cut throat industry. I believe talent needs to be recognized irrespective of sex, age, race or language. Sadly, the music industry is still very male dominated.  There are very few female singers, song writers or composers and hence collaboration with male artist is imperative. This in turn makes us very vulnerable to exploitation. The price a lady is usually expected to pay is in kind. I started my career facing the same predicament and still continue to do so every now and then. There are a lot of clichés out there that contribute to this. The common one being women have poor taste in music. Women often have to work harder to be taken seriously, only the ones truly passionate make it.

Fortunately I have great mentors who have supported me well especially in the last few years. But singing alone is not sufficient, that’s when I decided to take up song writing. I realized it’s not about just being nice, smiling and doing a good job. It’s also about making collaborations, promoting other people’s work, and being in the right place at the right time.

Can you talk about the people who have inspired you to embark on your own career? Who is your role model?
The person who has inspired me the most is definitely my mother. As clichéd as it may sound, she has been the greatest inspiration in my life and is the main reason that I am where I am and who I am today. I thank my parents for believing in me and letting me dream. I would have never been where I am today if it wasn’t for them.

Even though we live in different countries, her words of inspiration are still very effective in my life and I know she’s only a phone call away. We don’t realize the importance of family until we are away from them. For me, moving to the UK was when it hit me how much they mean to me. My parents always pushed me to follow my dreams and never be scared of taking risks. I have always been a very shy and protected person. If it wasn’t for my parents sending me abroad I would have still been the shy, quiet girl I was back in the days. Today I can proudly say that I am an independent and confident woman working towards my goal of becoming a full time singer.

Another inspiration in my life is the legend himself, Mr. A.R. Rahman. I’ve been an ardent fan and can’t get enough of his music. My ultimate goal is to sing for him someday.

Does your music carry a particular message or is it meant for pure pleasure?
As an independent artist, it’s important to understand that not everyone knows what your music is all about. For me, music is a sound that pleases, uplifts, nurtures and inspires my senses.

I think my music falls in the category of soulful/Indian music. I draw inspiration from various genres like ghazals, folk music, south Indian classical. Western music has inspired me to try different styles of singing. My music isn’t restricted to one language. I sing in various languages. Expressing feelings and emotions in different languages makes the whole experience very enriching. Since I’m classically trained, my music has a south Indian touch to it, whether it’s instruments or vocals.

I have always wanted to integrate music and psychology and study music therapy. I never got around to it because of work commitments. But at some point I would love to explore that path and use my music to help people.

What is your idea of an empowered woman?
An empowered woman is one who has the power and ability to make choices that are truly free. A woman who speaks the truth without any doubt and lives a life that is her own creation. Empowered women know what they want in life, and they go after it. They have dreams and goals and they make it a point to achieve those in a timely manner. Empowered women have a knack for building relationships with other people. They never stop expanding their minds.  Learning is the easiest way to becoming independent and stronger. It does not matter what type of learning, just trying something new daily. A woman striving for empowerment should never be scared of new opportunities or challenges.

Being a woman, it is often assumed that our identity exists in our sexuality, this sadly is the biggest barrier of empowerment.

Message for our readers related to women’s personal safety and the issue of violence against women.
Every day, millions of women and girls across the world are beaten and abused. Many are harmed in their homes, by their family members or community. Others are raped or harassed by the very security personnels that are meant to protect them. Some victims of gender-based violence are rich, some are poor. Some are literate, some are not. They are mothers, daughters, sisters and friends. The only common thread is they are all females, and they are abused because of it, and this abuse needs to stop.

There is substantial evidence that many children and young people harbor sexist attitudes and that these lead to the mistreatment and abuse of girls and women. Preventative work related to gender equality should start with children in schools from a young age. It is crucial in changing damaging attitudes and preventing violence against women.

To increase women’s safety and address domestic and sexual violence, including response to rape and sexual assault, it is critical to dispel the myth that women only have to think about ‘stranger danger’. Children and young people often find it easier to discuss issues such as violence against women and girls with their peers rather than with adults. So make sure you tell your friends if you have ever been a victim of abuse. Always reach out to your local support services. A good understanding and awareness about this issue is extremely important. Hence it would be helpful to use existing environments that women frequent such as colleges, schools, cinemas etc, to raise more awareness.

Bio
A trained singer in Carnatic Music and a well-known face in the Malayalee music community back in her hometown in India, Priti Menon kickstarted her musical career in UK by winning the Zee Sa-Re-Ga-Ma-Pa‘s Online Talent Hunt in 2010 and it set the stage for this young and beautiful artist to establish herself as a prominent name in the British Asian Music scene.

Her breakthrough in the online hunt was followed by a feature on IndyBrown.Tv’s   debut television show about talented, budding artists and an opportunity to playback for a (soon to release) Tamil-English film. Opportunities and exposure form a virtuous circle and this led Priti to be discovered by eminent artists, journalists and RJs! Priti has successfully collaborated with artists such as Arjun, Benny Dayal and Kishan Amin. She has performed along side the talented Ash King as well as the legendary Bally Sagoo as his lead vocalist at the London Mela 2013.

From bhajans to bhangra, Gujarati to Bengali, Priti‘s versatility is evident from the range of genres and languages she has sung in. She has been featured in the Eastern Eye newspaper, Sabras Radio as well as the BBC Radio. She is definitely a name to watch out for in the near future.