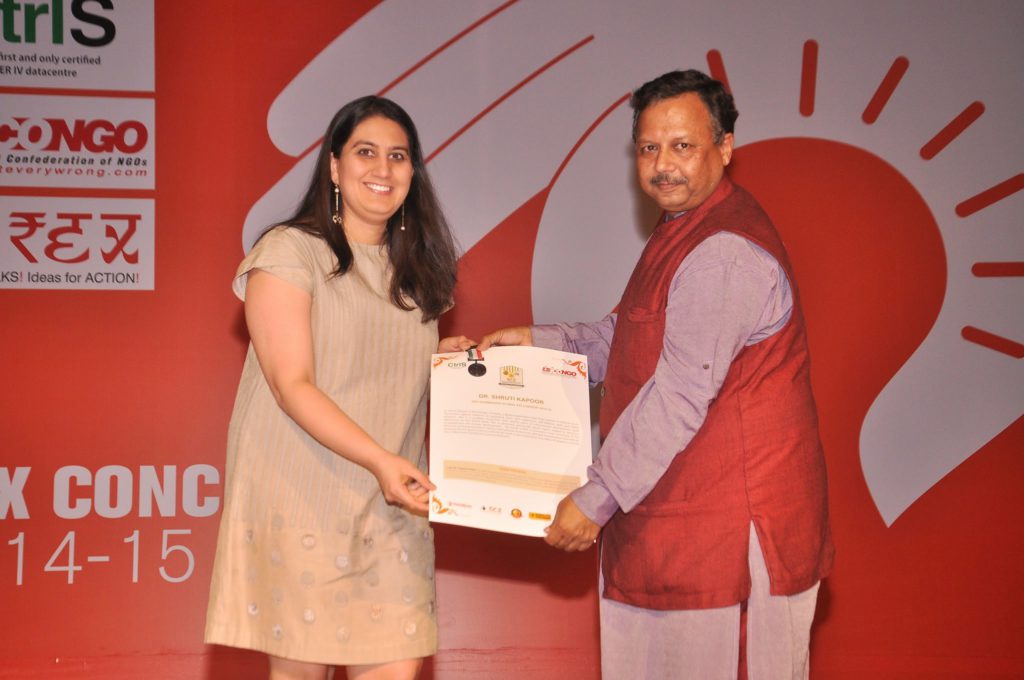 March 2015: The very versatile & spontaneous Dr. Shruti Kapoor has received the REX Karmaveer Global Fellowship and Karmaveer Chakra for her commendable work for the society.

She has received the fellowship on the 23rd of March in New Delhi at the exclusive awards function which is a part of “iCONGO’s REX Conclive, organized on 21st , 22nd and 23rd of March 2015. REX (www.rexideas.com) is Latin for KING and REX conclives was the king of all good thought leadership for CHANGE conclaves (with an eclectic mix of “ROCKSTAR SPEAKERS”, cause related performers, short film screenings & awards) where ideas speak out to encourage proactive action to change our world. REX CONCLIVE is the scaled up new avatar of the RIGHT every WRONG conclave, which were knowledge forums that  were pivotal for pioneering huge thought leadership for addressing various social issues ranging from Education to Healthcare & Poverty to Marginalization, Climate Change, Corruption, Electoral Reforms, CSR, Communalism, MDGs and Constitutional rights & duties awareness. At REX, thought leaders are invited to engage with audiences by giving their most enthralling talk in 15 minutes or less. The talk could be anything that fits in within the 3 pillars of REX (as given below) across the thematic sectors (Business {Banking, Insurance, Microfinance, Telecom, Advertising, Retail, Infrastructure, Low Cost Housing, Aviation & others} Luxury brands, Media, NGOs, Government, Venture Capital, Social Ventures, Media, Entertainment, Education, Healthcare, Public Health, Philanthropy, Agriculture, Youth Affairs and other themes. REX LIVE shall focus on the following 3 pillars of REX.

The common thread the speakers need to stitch in is how the idea can make a difference for the people and the planet.

The whole idea of the REX KARMAVEER GLOBAL FELLOWSHIP (RKGF) is to recognize people who have the courage of conviction to think differently and walk the path less trodden and to act on alternative/innovative ideas which may make a difference in our world. We also believe that every human being has a hero, a leader, a volunteer, a champion of change and a teacher within her or him and only a few people acknowledge and awaken this power within, to help inspire the change.

RKGF helps life-changing innovators from around the globe to integrate within the REX and Karmaveer community. It helps them share their impactful ideas for action with a million audiences and transform lives through projects and ideas of hope. The idea is to bring together like minded, socially responsible individuals who have a desire to learn more, be more and do more to make a difference.

Karmaveer Chakra is the National Medallion of honour for proactive voluntary citizen action to Be & Lead the Change. These awards were instituted with a simple passion mantra – to recognize real life unsung heroes who believe ‘It is better to light a candle than to curse the darkness’.

These chakras recognize and applaud the social commitment of concerned individuals, who have proactively and voluntarily worked for bringing a positive transformation in the society and the world we live in. In today’s world where there is huge apathy & indifference, we feel a paramount need for being not just a good person but also a good citizen who exercises her/ his rights, duties & responsibilities as a concerned, just and humane citizen.

Dr. Shruti Kapoor is the founder of Sayfty, a global organization that helps women in India protect themselves against violence by equipping them with awareness, self-defense skills and safety products. She is a qualified Economist with several years of international development work experience at The World Bank.

She is extremely passionate about topics related to women’s empowerment and human development.  She holds a PhD in Economics from University of CA, Riverside and has presented in various international conferences. She was recently presented with the 2nd Runners Up Award at International Women of the Year, Italy.

We congratulate Dr. Shruti Kapoor for possessing the conviction and compassion to stand up, speak out and lead the change with his/her positive attitude! The management of REX, which has selected his/ her nomination after thorough due diligence said that they were glad to have found a true champion of social justice issues and wish that more and more citizens gave their time, involvement and humane feelings towards addressing social justice issues and being the change and role models for other citizens to follow.