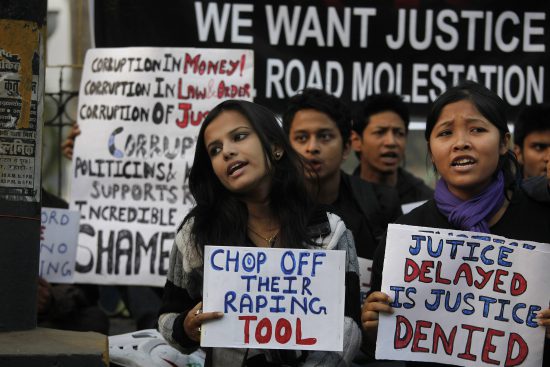 Rape is a controversial topic. Especially so in India, which has experienced several horrific and high profile cases in recent years. Such cases include that of a gang rape of a 23-year-old student on a public bus in Delhi in 2012. This case and subsequent ones prompted a revision of sections in Indian law that deal with rape and sexual assault. The law has reformed to a certain extent due to public outrage. But is it rigid enough? This article will examine this question and also consider the stigma surrounding rape. First, let us look at India’s current laws on rape, and the reforms made.

India classifies rape as a criminal offense. Previously, rape was defined as intentional, unlawful sexual intercourse with a woman, with or without her consent under several circumstances [1]. Under the IPC section 375, rape can receive a 7-10 year sentence plus a fine – with a minimum of 10 years if it is unsuspecting, a gang rape or the victim is under 12 years of age. Other types of forced sex such as oral sex and sodomy are covered under a different section of the IPC.

However, the subsequent public uproar over the number of horrific rape cases in India has resulted in a number of reforms within Indian law. Legal revisions in 2013 resulted in an expanded definition of rape; increased medical provisions and minimum punishment in certain cases such as if the victim is left in a persistent vegetative state. The legal age of consent was also raised from 16-18 and it is now mandatory for all government and private hospitals to give free first aid and medical treatment to victims of rape [2]. A fast track court system was also implemented to allow for quicker prosecution of rape cases.

How rigid are these laws?

Rape laws in India have toughened up in response to the public outcry.  Rape victims are – on paper – more likely to get the medical help they deserve. The definition of rape is more inclusive. Will all these legal changes help ensure a timely justice? Unfortunately, these reforms have not necessarily been enough on their own to deter rape. Rape is still the fourth most common crime against women in India. Even more shockingly a 12-year-old girl was raped on her way to Independence Day celebrations in Chandigarh, India on the 15th August this year. The occurrence of such rape attacks despite the reforms shows that deterrence has not been achieved. The abuse of rape laws is unbridled. This is a problem the reforms have failed to tackle in its entirety.

So while the reforms on paper may be more rigid, exacting justice is not so simple. For example, India has no sentencing guidelines like that of the UK or the US. Judges have no guidelines on how to proceed with rape cases.

A significant factor in why exacting justice is not easy is due to the social stigma surrounding rape in India.

Only 5-6% of rape cases are reported each year. Many cases go unreported because victims fear humiliation and retaliation if they speak up. The process of reporting a rape and obtaining justice is particularly traumatic. Police may try to dissuade a victim from filing a report. Indian rape victims often undergo the two-finger test – where the doctor inserts two fingers into the vagina to see if it is lax and the hymen is absent. Evidence of both means the victim routinely has sex and thus it was consensual [3].  Victims are asked why didn’t they try harder to escape?  Were they, in fact, a willing partner? It must be traumatizing to have your worth questioned in court, and ultimately your report discredited because you are apparently of deviant character.

It is humiliating. Would you blame a victim for wanting to avoid this trauma simply to get a stab at justice? A victim’s life can fall apart after such an ordeal. Relatives often abandon them, friends leave. Many men in India consider women as weak; that they are the jailbait; that they are the ones to blame for rape. Men will be men, they say. The dominant patriarchal state of the Indian society prevents justice for rape victims. Justice is often too late or not enough. The social stigma surrounding rape and society’s view of women hangs like a thick cloud. In order for the law to work at maximum effectiveness, the stigma needs to change.