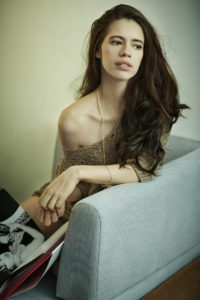 Kalki Koechlin is an Indian film actress of French descent who debuted in Anurag Kashyap’s critically acclaimed Hindi film Dev D. Koechlin prefers to call herself a humanist over a feminist, urging people to celebrate ‘Equal Day’ instead of a day for women.

Tell us more about yourself and what you do. What lead you to becoming an actor, writer and producer?
Acting was something I pursued with stubbornness. I studied in Goldsmiths, University of London and had to get several jobs to pay my fees. Writing, I have been doing for myself since I was young, and it’s just sort of seeped into my work more and more. I’m not really a producer. I have yet to make money from my own work!

What are some of the challenges you faced in your chosen career? How did you overcome them?
Unpredictability. Sometimes there’s no work coming for months on end. I dealt with that by creating my own work, writing a play, performing for free, the important thing was to keep my body and mind occupied in acting, not to get complacent. Then resisting certain stereotypes, not repeating the same roles just because they were successful but pushing myself to new challenges.

What do you enjoy more: theatre or films? What is your favorite role that you’ve played so far?
Theatre of course is my first love but I can’t choose between films and theatre anymore. I love both mediums immensely. Theatre keeps my body, voice and presence in practice and film works on internalising and exploring psychological, emotional aspects. I mean both the mediums overlap in these things, and at the end of the day it takes a lot of practice and repetition to make a character look easy and believable.

Tell us about ‘Margarita, With a Straw’. How is this role different from the others that you have previously played?
Well, to state the obvious it’s different because I’ve never played a character who has Cerebral Palsy (CP) before! It was a long process of research and training for about 6 months, understanding CP from a physiological and psychological point of view. I spent a lot of time being in a wheelchair and doing daily activities in a wheelchair, I worked with a physiotherapist and speech therapist and most importantly I got so much help and support from Malini Chib who herself has CP.

What inspired you to do the recent monologue on womanhood or the ‘Ladies it’s your fault’ viral video? Both were extremely powerful. Where do you think the real problem lies in India when it comes to treatment of women?
I don’t know where the inspiration comes from. It’s an amalgamation of all experiences that a person faces in life, and certain triggers, which make it come to the surface. One trigger for me was the Delhi rape, which left me very disturbed, and I really felt the need to contribute somehow, say something. That’s why I wanted to do Rape: it’s your fault. The monologue came from a collection of thoughts in my personal diary; I just wanted to give my experience of being a woman in India.

I think of course that laws need to be tightened and education of the authorities, police, government, teachers on the equality of human beings is really, really important. I also think education needs to be geared towards young men, young boys, that they need to learn to integrate with girls in schools, colleges, jobs, to see them as equals from a young age. We need to break taboos on periods, sex, the female body, we need to demystify the woman, show that we are just the same as men on the inside.

Have you ever faced misogyny or been discriminated against in the movie industry because of “differences” due to gender, race, skin color?
I have faced stereotyping because I am a white skinned woman, like I’m loose moraled, that I play ‘bold’ characters, as though that were something to be ashamed of. But essentially I think we have to know our beliefs and ourselves and stick by them rather than blame the world around us. Every decision I have taken, right or wrong, has been my decision and no one else’s. I think I have been very lucky in that sense as there are still so many women who have to live with the decisions of other people.

Message for our readers related to women’s personal safety and the issue of violence against women.
I know a lot of you readers are women and I hope you all know your rights, safety is a priority for any self respecting nation, and if it is not offered to us it’s our responsibility to fight for it.

I also hope some of you readers are men. We need men to want equality for women, we need men to be feminists, we need men to understand that women have a choice as much as them to do anything with their lives and that choice must be respected and when threatened, it must be defended.

Bio
This Bollywood Gen Next trendsetter, having grown up in a small town in Tamil Nadu, has studied drama and theatre in Goldsmiths, University of London and has performed in a number of plays, including David Hare’s “The Blue Room”, Marivaux’s “The Dispute” and a devised play “The Rise Of The Wild Hunt” before foraying into Bollywood. Kalki made her mark with her very first film “Dev D”. Having worked with well known names like Sanjay Leela Bhansali, Dibarkar Banerjee, Zoya Akhtar, Michael Winterbottom and Ayan Mukherji, Kalki is well on her way to carving a niche for herself in Bollywood.