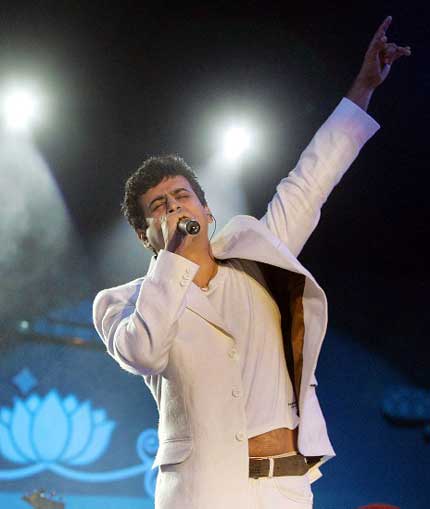 Music has the ability to transcend boundaries and connect people and identities. It’s thus surprising that in the most melodious times, we manage to not only find disparities, but also the means of incessant debate and outrage. This month, popular singer Palash Sen belted out more than just music at the Indian Institute of Technology, Mumbai’s college festival. A lot of us (not just females) found ourselves reeling over with shock and disgust at the sensibilities of the educated, privileged and the respected amongst us.

As a ‘joke’, Sen asked the guys in the audience if there were good-looking girls on campus? When the boys answered in the negative, he assured them that they will be able to go out and find the best-looking wives who would make rotis for them. The singer also added that while women are the most beautiful creatures, men are more intelligent.

Indian entertainment thrives on sexist jokes. From the wife’s weight to her belan, everything is hilarious. Is it? First year law student, Stuti Khosla says she doesn’t understand why such comments or “jokes” have to be made in the first place. “As a woman, I don’t find it funny at all. Are there good-looking girls in IIT-B? How is that relevant to music or singing? If you want to crack jokes, be fair. Let’s talk about what men are capable of doing?” Kritarth Jha, a second year engineering student agrees. “It was all very unnecessary. He was playing to the gallery. What could have been an instance where both genders could have come together for music has now snowballed into a discussion of gender stereotyping. That really saddens me”.

Not everyone feels the singer was completely at fault. Gurman Bhatia, a third year student of journalism at DU believes the issue was blown out of proportion and adds that Dr. Sen has clarified that he was quoted out of context. Many students do not think his comments were, in any way, innocuous. Shreya Shashank, a third year engineering student says, “I think everything about this is offensive. His belief that to sound cool and click with the crowd (predominantly male), he needed to empathise with their poor social life on campus is sad. Actually, this wasn’t even about the social life, but the lack of entertainment there since there weren’t beautiful “things” to ogle at. To top it, these statements were lame and self-contradictory because he was standing in India’s top, most prestigious institution, where not just education but wholesome knowledge is imparted. The girls there have literally outdone lakhs of boys and have been granted admission. And they are still labelled less competent, intelligent or capable. That sounds plain stupid.”

There is no doubt his joke was completely sexist and downright offensive, but does it really come as a shock to any of us? After all, women have been historically seen as the calmer, gentler, more nurturing species. Their place has been rightfully allocated to the household. A woman doing a tough, corporate job is still an oddity. They might have transcended boundaries of the home but they are still judged majorly on grounds of beauty, grace and charm, not intelligence, wit or job skills. Sumedha Priyadarshini, a third year student of Sociology at Delhi University says, “In his head, he probably thought what he said was regular, nothing unusual at all. But this points to the psychology of the society in general and their views about females. Kritarth adds, “It underlines the entrenched gender roles in the minds of many Indians. For that matter, males of any nationality today”.

But when a public figure makes a sexist joke, does it hurt our sentiments more than ever? When he comments in the presence of females in the country’s top institution, is it unsettling? Saumya Swaroop, a student of financial engineering at Princeton University says, “I feel that the public follows their favourite celebrities, and their views publicized through the media. So they have an added responsibility to not make statements that forward such biased views. It’s not only offensive, but I would say dangerous because the public is immature at many levels. And these statements only ‘strengthens’ the popular view that women are objects.” Stuti agrees. “You’re being scrutinized every minute. You can’t afford to be reckless, especially on topics such as this.”

For me personally, it all boils down to the fact that we sit up and take notice only when scenarios are overtly uncomfortable. Sexist jokes and comments have become a part of our daily lives. From our favourite comedy show to dumb blonde SMS forwards, from Punjabi rap that we dance to at weddings to the unease with which we approach female officials. It’s so regular that we don’t notice it anymore. Celebrities are easy targets, but not the only ones at fault. Of course, they have a responsibility and need to be careful. but so do we. ,The obsession with women as beautiful objects extends to many more areas. It’s a much bigger battle than just our fight with Dr. Sen.