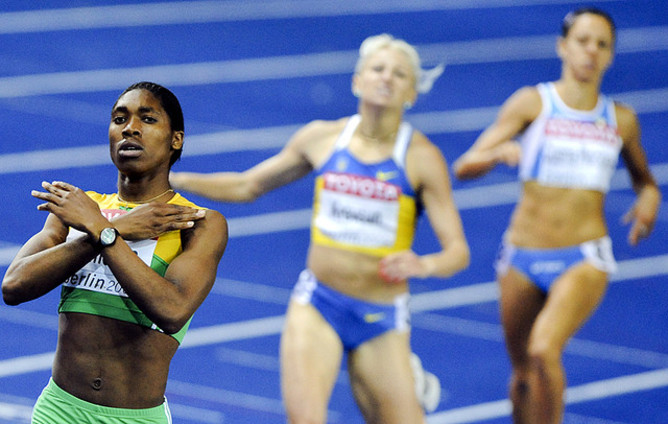 Sports, one would think, is a lot about fair play, team work, respect, acknowledgment and appreciation of the worthy. Everyone gets a chance to race for the ribbon in their own track and space. While you give it your all, you don’t hog, manipulate, or take away from other people’s achievements. At least, not in an ideal world.

But in a world like ours which is far from ideal, gender testing in sports is a common phenomenon. Competitions are unfair wherein often the male competes with the female, thus ensuring his greater chances of winning. Gender testing is the process of verifying the eligibility of an individual to participate in a particular event that may be limited to a single sex. However, cases across history have shown that it has more often than not, escalated into just a discussion on how the male masquerading as a female maximises his chances.

For a long period of time these tests were mandatory for female athletes across the world. An archival New York Times work clearly suggests it was due to fears that male athletes would pose as female athletes and have an unfair advantage over their competitors.

Stanisława Walasiewicz won a gold medal in the women’s 100 meters at the 1932 Summer Olympics. It was later (after her death) discovered that she had partially developed male genitalia. German Dora Ratjen competed in the 1936 Olympic Games but was later concluded to actually be a man. That gender testing is out there to spot the strong, macho man in a crowd of gentle females is more than just writing on the wall.

Female Indian track athlete Pinki Pramanik’s is of course, one of the more recent, horrific cases. She was accused by a female roommate of rape and later charged. She went through the public trauma of being gender tested and declared a male although she and other medical experts continued to dispute the claims.

South African middle-distance runner Caster Semenya had also been questioned for her “masculine appearance”.  When Semenya won the gold medal in the women’s 800-meters in 2009, the win was eclipsed by the gender questions, and her competitors complained that she should not have been allowed to compete.

Researchers and medical experts say that the performance of male and female athletes differs significantly, mainly due to the fact that men produce a lot more androgenic hormones than women and, therefore, are under stronger influence of such hormones. These methods claim to make no definite determination of sex, but only seek to approve of an individual’s ability to compete in a sporting event, based on sex.

While the attempt at fairness may be seen as noble, there is little doubt that gender testing is not just potentially destructive to an athlete’s career, but makes clear statements on the superiority and invincibility of masculine strength and capability. That women are gentler and meeker is something we’ve heard and learnt for as long as we can remember. But the handling of incidents like these reminds us that the focus shall always be on physicality, and not on the moral incorrectness of such acts. The point is that the man pretends to be a woman, gains an unfair advantage based on his physical strength and ultimately wins.

There is probably a lot we still have to learn about fair play. Not the shine of the medals and the glistening tracks, but about human emotions and rights.