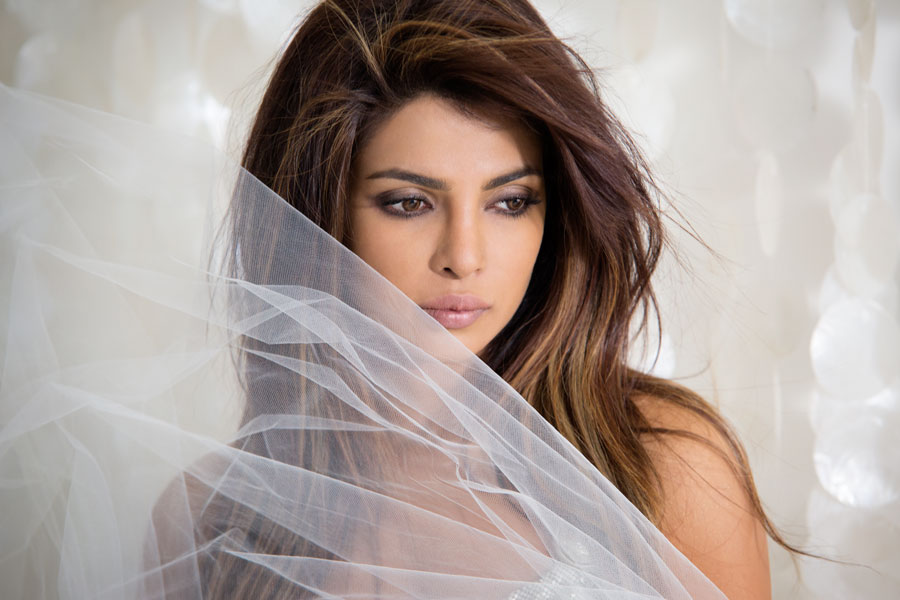 Priyanka Chopra is an award-winning Bollywood icon who has appeared in more than 40 films. A pageant queen, Bollywood actress and now a pop singer, Priyanka is one of India’s most celebrated actresses.

Priyanka Chopra – the actor, model, singer. What inspired you to become who you are today? Any personal ambitions yet unattained?
When I became Miss World and was presented with the opportunity to become an actor, it uncovered a creative side of me that was dormant for a long time. Since the opportunity presented itself to me, I grabbed it with both hands and jumped right in. Since then, it’s been a journey of discovery and striving to do better in everything I do. I want to do more, I want to explore all facets of my creative being whether it is acting, singing and now producing, I want to uncover all those other hidden creative facets I haven’t discovered as yet. I am an entertainer and to me that comes with no limitations. The world is my oyster.

What are some of the challenges you faced in your chosen career and how did you overcome them? Did you face any prejudice or stereotypes being a woman in the film industry?
Over the course of my career, there have been many hurdles I’ve faced. It started with the cliché that beauty queens can’t act to the taunt that heroine led films can never be a box office success. I’ve faced many of the clichés you hear about but I put my head down and did the only thing I knew how to… work hard! I have always believed that if you are honest and true to what you believe in and put everything you have into it, success will find it’s way to your doorstep. And that has happened with me. Today, my work speaks for itself and has always been able to silence even my harshest critic. Every hurdle has taught me a lesson that I will never forget but each one has also made me more resilient. I love what I do and the only person who can stop me is… me! Nothing and no one else can.

You have give some powerful performances in movies like Aitraaz, Fashion, Kaminey, Barfi and now Mary Kom. Which is your favorite role that you’ve played so far and why?
That’s a tough question. Every one of the films you’ve mentioned has been a milestone for me and has given me so much. Each has its own personal story and memories attached, which is why it’s so difficult to choose. If I have to make a choice, I would say it is Barfi. I just let myself go and put myself into the hands of the director. I lived my life through Jhilmil’s eyes all through the shoot and the world was a beautiful place. The overall experience of working with Anurag Basu, Ranbir, Illeana and the rest of the crew were also quite memorable. It’s a happy memory I will have… for always.

Another favourite of mine is Mary Kom. It has, by far, been the most challenging… physically, emotionally and creatively. As an actor, it was creatively very satisfying for me when the audience unanimously accepted my portrayal of a living, breathing, real life champion.

Tell us about ‘Mary Kom’ How is this role different from the others that you have played? How did you prepare mentally and physically to play the role of a wold boxing champion?
Mary Kom was a completely new experience for me. It was the first time that I was essaying the role of a real life person. This was not a fictional character created in the mind of a writer. Mary Kom is an incredible story of passion, perseverance and courage. This film was a huge challenge for me as an actor. The physical training coupled with the boxing training (I had to learn to fight like Mary) was supremely exhausting. Sometimes, it got so much that I felt like I was training to qualify for our Olympic team! Getting into the mind and emotions of Mary Kom was also such an amazing challenge. I truly believe that Mary’s story is a story of every woman in India today… it is about somebody who will not be confined to limits, someone who believes in breaking barriers… it is the story of every woman who wants to break the shackles of being ordinary and strive to achieve the extraordinary.

You have always been sensitive and vocal about women’s rights and issues; be it female infanticide and foeticide, violence and abuse of women or education for girls. What inspired you to lend your voice to the documentary ‘Girl Rising’
I am and have always been a keen supporter of causes related to underprivileged children and more specifically for the girl child. There is so much injustice against women and girls, not just in India, but across the world where even their most basic needs are being denied. There is a quote that I often use that sums up how I feel about this issue and why I am so passionate to bring change… “The hand that rocks the cradle, the pro creator, the mother of tomorrow… a woman shapes the destiny of civilization. Such is the tragic irony of fate…that a beautiful creation such as the girl child… is today one of the gravest concerns facing humanity.”

Girl Rising is an amazing and powerful film which tells individual stories of 9 incredible girls from around the world and how they fought the odds to emerge triumphant. It’s a brave film, which is at the center of this groundbreaking campaign that promotes a simple and critical truth: educating girls can change the world in just one generation! I participated simply because I cannot think of a cause today that is more important than ensuring girls have the same access to education as boys – and to become the women who can achieve their fullest potential.  I lent my voice because I knew it would help them to be heard.   For me the winning point about this film is that it highlights proactivity rather than just the problems… it shows us that change is possible and more importantly, the significant impact that it has on girls from across the world.

Through my role as Goodwill Ambassador for UNICEF, a Champion of the UN Foundations Girl Up campaign and through my personal foundation, The Priyanka Chopra Foundation for Health and Education, I want to use my position and my voice to bring awareness to the matters that need the most attention and to bring about change in whatever way that I can. The work that I do in these areas gives me immense satisfaction and joy and I am constantly looking at ways in which I can help improve the lives of girls from around the world.

If the new government makes women’s safety an absolute priority in its good governance agenda and actually enforces that, it will be a huge step forward in getting us to where we need to be in terms of what’s happening to women in India.

What is your idea of an empowered woman?
A woman who has the choice and the financial independence to live her life as SHE chooses and also have the opportunity to follow her dreams. An empowered woman is also someone who believes in herself and her abilities and capabilities

Message for our readers related to women’s personal safety and the issue of violence against women.
The world can be an ugly place sometimes and we can run away from the harsh realities that exist. While on one hand we all must come together to raise awareness and find workable solutions against these types of heinous crimes, we must also always be aware of our situations and surroundings and be prepared to defend ourselves. Be aware, be alert, be prepared.

Bio
Miss World, Actor, International Recording Artist, Humanitarian, Green Crusader, Brand Ambassador… Priyanka Chopra is the multifaceted personality, who is one of the most recognised and applauded talents in Indian cinema.

Her foray into the entertainment industry began at the age of 17 with the Miss India title followed by Miss World in 2000. In 2002, Priyanka made her entry into the Hindi Film industry and since then has taken on acclaimed roles in many landmark films. She is today recognised as one of the most versatile actors with many path-breaking performances to her credit. Her most recent portrayal in and as 5 time World Boxing champion and Olympic medallist Mary Kom has won accolades from both critics and the audience alike, reiterating her position as Indian cinema’s reigning queen.

With numerous national and international awards under her belt, Priyanka was also recently conferred the Best Actress title at the National Film Awards, the oldest and the most prestigious film awards in India.

Not confined to her contribution to the Indian cinema only, Priyanka is actively involved with social issues as the National Ambassador for UNICEF in India, a GIRL UP Campaign and the Green Ambassador of the NDTV Greenathon, a nationwide environment campaign. As one of the leading brand ambassadors in the country, Priyanka is today the face of some of the biggest brands including Blenders Pride Fashion Tour, Nikon, Dabur and Sahara.