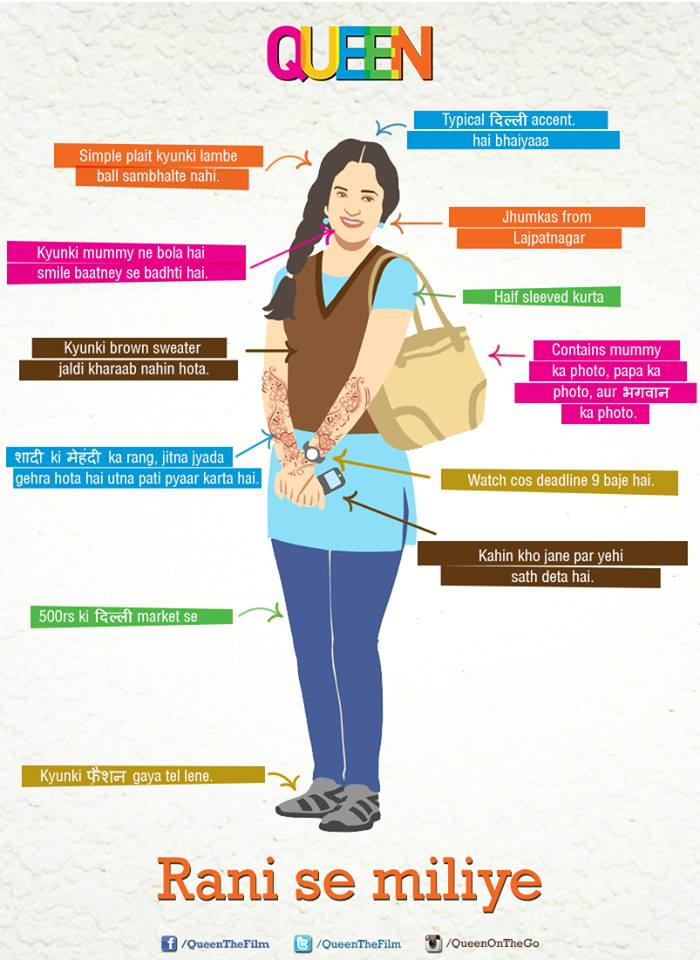 Bollywood movies are usually about heroism where a man rescues and comforts the female character and takes responsibility to fix all problems. Most sucessful Bollywood films have a male superstar in the lead role. However, looking at the recent trends in Bollywood we can see that there is a small shift from the typical movies to a new kind of women oriented cinema. One such movie is Queen which has restored my faith in good quality cinema.

Queen is one of those rare movies in Bollywood which has portrayed a realistic story but still managed to keep the audience entertained. The movie is about a girl Rani, who is dumped by her fiancé a day before the wedding. Portrayed as a simple girl from a typical Punjabi background, Rani instead of sulking decides to go alone on her honeymoon. The beauty of this film lies in the potrayal of true and obvious emotions. From a frightened girl in a foreign land to a strong girl who fights back when someone tries to mug her, the film successfully shows it all. Unlike other movies where a bold woman is stereotyped with a certain set of characteristics and a soft character is associated with other characteristics, Queen shows how a woman can be both strong and soft depending on the situation. The movie has subtly highlighted the gender disparity prevalent in the Indian society. A well educated girl leaves a good job opportunity just because her boyfriend doesn’t want her to work. While the movie has does a good job at showing the ground reality in India where many girls sacrifice their career for families, it also shows the spirit of a true Indian woman who fights against the injustice done to her. The transition of a simple girl unaware of the outside world to a bold, street smart woman who travels various countries is certainly the highlight of this movie.

From a feminist point of view the movie works very well in portraying the character of a woman. Rani is strong but still has an innocent charm to her, she’s oblivious but still has the courage to stand against what is wrong. The protagonist did such an excellent job that at no point during the movie did I feel the need of a hero.. In a typical Bollywood setup one would expect the entry of a hero when Rani goes to Paris alone and faces difficulties but the movie takes us on an unexpected journey. One of the best things about the movie is it did not show an independent single mother in a negative or weak role. Vijaylakshmi who Rani meets in Paris is a fiercely independent, young, single mother. She enjoys multiple relationships and was frivolous with her drinking, yet her character was bold and strong.

In today’s India even though women are strong and independent they are bounded by their values and beliefs. While they are courageous enough to fight injustice they are also soft enough to value the people who love and respect them. In my opinion Queen has truly captured the spirit of a present day young Indian woman. It’s a must watch for all.