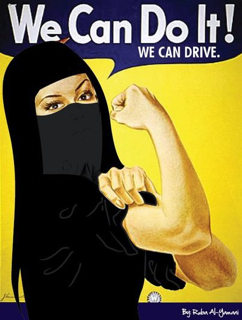 Women in the United States today, undoubtedly, experience gender-based discrimination. From abortion rights, to the wage gap, to victim blaming for sexual assault – the list goes on. We certainly have no shortage of social issues to tackle in 2018. However, not to minimize anyone’s feelings or plights, most countries have it statistically worse than we do. According to The Global Gender Gap Report, the United States ranks #49 out of 144 countries. Based on economic, educational, political, and medical involvement/opportunity, the GGR attempts to accurately rank countries based on their level of numeric gender equality. Autonomously driving, voting, receiving medical care, and having jobs are privileges we often overlook. Compared to the United States’s #49, Saudi Arabia takes #138 out of 144. Though unquestionably low, Saudi Arabia improved from 2016, when they were #141. In this article, I will delve into Saudi Arabia’s prolonged progression into a more egalitarian climate and its implications. Hopefully, this provides some insight into both the plights of Saudi women as well as our myriad blessings in the United States.

According to an NBC article published earlier this year, while conditions have improved by leaps and bounds in the early 2000s, Saudi Arabia still has miles to go in the way of gender equality. Saudi culture contains many ingrained, sexist social practices.

So, while male guardianship no longer has any legal implications on paper, it still dominates millions. By June of this year, women will legally have independent driver’s licenses and motor vehicle access. Originally, women required a male chaperone’s permission to acquire either. Under this regime, men supervised female travel, marriage, release from prison, healthcare, and employment. Most citizens still abide by these deeply embedded cultural mores, though the laws have changed. It will likely take decades more to completely dismantle the system, simply because it has been in place for so long. Saudi men are accustomed to escorting their sisters, wives, daughters, and even their female elders. They are used to providing them the permission to perform basic tasks that women in the United States would not think twice about doing alone. Not only does this limit the female population on paper, but it constantly reinforces the primitive role of male dominance over every aspect of life.

On top of the aforementioned changes, the last few years have shown alterations which allow women to be more active participants in their communities. This shift has spanned numerous fields. In 2009, the king appointed Noura al-Fayez the first female minister to Saudi Arabia’s government, as the deputy education minister of women’s affairs. 2012 brought Sarah Attar, the first Saudi female, to the London Olympics. Shura, the consultative counsel to the king, finally elected female members to diversify the environment in 2013. In the same year, five years before being given motor vehicle rights, women legally received motocycle and bicycle access. In 2015, Saudi Arabia finally granted suffrage to their female population. Sarah Al Suhaimi was elected as the first female head of the Saudi Arabian stock exchange in 2017. Clearly, we have the fortune of witnessing the configuration of a progressive pattern. This country is not stagnant in its misogynistic ways. Rather it is evolving at an increasingly rapid pace.

However, while we commend their advancement, we are also justified in feeling some sadness. Comparatively, reform has taken so long, and it is far from over. Saudi Arabia is still one of the worst countries in the world for women, and has been for decades. This progress should, by no means, give us the go-ahead to look away and assume everything else is fine.

Additionally, as stated by Rothna Begum of the Human Rights Watch, female activists that pushed for reform before the ban was lifted still have not been released from prison. This primarily has to do with the Women2Drive campaigns of 2011 and 2013. To draw attention to the cause, women filmed themselves driving down Saudi streets. They were subject to intimidation, arrest, detention, and even exile in some cases. This is highly inhumane treatment towards people who only wanted equality. They remain detained, though laws now accommodate their requests.

Moreover, the rest of the world should openly encourage forward movement and progressive thinking. However, I personally think it provides some perspective into how privileged our lives are in the United States. As feminists, as fellow women, as fellow human beings. The millions of our sisters who have lived and died in oppressive nations around the world are our problem. It is an affront to all women that such laws exist in this century. Societies should not raise girls to think they constantly need permission from a far-superior male in order to comfortably go about their lives. The current kingship appears to be making positive changes, which is all we can hope for in terms of 2018 law. As far as social shift, we may have to hang tight a little bit longer.