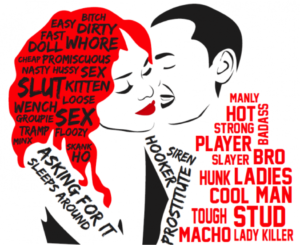 Last week, I was scrolling through Netflix trying to find something other than The Office to watch, because somehow I always end up rewatching my favorite episodes. One show, in particular, caught my eye.  Netflix’s newest show, Thirteen Reasons Why, centers around a high school student named Hannah Baker’s suicide. She leaves cassette tapes behind explaining the reasons that drove her to commit suicide. Each episode focuses on a different story related to her bullying. Each story she tells relates to her sexuality and slut shaming.  The show really impressed me because it addresses such an important topic, slut shaming.

I’ve encountered slut shaming and bullying, whether it be first hand or through experiences of my friends and family. Making derogatory remarks based on a woman’s sexuality has become popular among teens, especially on social media.

Social media has the ability to influence the thoughts of our peers. Hannah too faced the negativity of her peers. Her fellow students tormented her just because of silly rumors. It devastated her. Situations like this don’t just exist in tv shows, it happens every day to so many young women.

The lack of accountability that comes with a social media account enables the feeling of being able to say anything, without consequences. Women consistently face criticism for being “too open” about their sexuality, and this double standard is nothing new. Despite engaging in similar behavior, men don’t face the same standards as women.

Women constantly face criticism on the way they dress, the amount of makeup they wear, their persona, who they surround themselves with, and many other factors. My friends who go out on weekend,  hang out with guys and wear what they want are often slut-shamed.  I’ve had to consider the way I dress, how much makeup I wear, and what other people will think of me if they happen to see me out with some of my guy friends. There’s an automatic assumption that if I’m with a guy, I’m dating them. Hannah faced this too. People sexualized her by thinking of her as a hookup or arm candy for whatever guys she was with.

Slut shaming emerged from the Sexualization of women from a young age. The Sexualization of girls and women is apparent in many aspects of day to day life. Sexualization is demonstrated in occurrences from school dress codes that prohibit girls from revealing their knees or shoulders to the idea that women are seen as objects of a man’s desire. Young girls shouldn’t have to worry about their clothing choices affecting the way they’re seen by older men. I believe there are many ways this hypersexualization of women and girls can change.

This new norm would create a change in women’s views of each other for future generations. Standards for men and women are different. We tend to pit women against each other through superficial comparisons which are irrelevant to true character. Wearing a lot of makeup or none at all isn’t a factor in how you treat others or how intelligent you are. People shouldn’t judge women solely on their superficial value and should work together to try to change this. This is one reason why women should band together and create environments, both online and in person, of love and support for one another, instead of tearing one another down.

Changing people’s mindsets will also change the way people interact with one another on social media sites. Changing the current mindset can influence and encourage all people to stop the hatred projected towards women based on perceived promiscuity.

The only way we can make a change like this is to work together instead of constantly competing with one another. I hope that with women as allies and a change in how society regards them, we can end slut shaming and end the negative treatment of young women, like Hannah Baker.