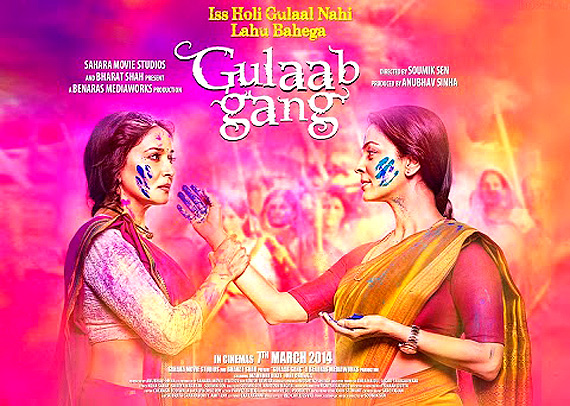 A couple of weeks prior to Women’s Day, a documentary based on a women’s vigilante group, The Gulaabi Gang, was released in India. The production of this documentary started in 2009, after the director Nishtha Jain, met the organization’s leader Sampat Pal Devi. She has been a champion of women’s rights for decades. She has fought against child marriage, the practice of dowry and illiteracy. She and her comrades are known to wear pink saris and attack men who abuse their wives.

The project was delayed because, among other things, it overlapped with a similar movie titled Pink Saris.  Pink Saris was never released for the audience in India even though it received immense critical acclaim from viewers all over the world.

Gulaabi Gang was scheduled to release in India on 21st February 2014. It had already won several awards at film festivals around the globe, and therefore its release was eagerly anticipated.

In India, movies are released in two kinds of theatres; multiplexes and single screen cinemas. Multiplexes are movie complexes with multiple screens that play multiple movies simultaneously. They tend to have a posher audience because of the wide range of films they play. Single screen cinemas are movie theatres with one screen that only play one film at a time. They generally attract audiences from a lower socio-economic class.

Gulab Gang was only released in select multiplexes in big cities and in none of India’s few hundred single screen cinemas.

A couple of weeks later, on Women’s Day, two women-centric movies were released in India. One of them was Gulaab Gang, a supposedly fictional story about a group of women who have their own style of dispensing justice in rural India. It starred the biggest Bollywood actresses of the late 90s; Madhuri Dixit and Juhi Chawla. Since it was a typical commercial potboiler and delivered an important social message about gender equality, it was expected to do well at the Box office. Unfortunately, the movie bombed; critically and commercially.

A documentary and a commercial potboiler, both released within two weeks of each other, failed to either reach or appeal to the masses.

Women-centric movies in India are rare. Women are underpaid in Bollywood, have to struggle more than their male counterparts, and also have lower career tenure than men. In the past, some women-centric movies have done well at the box office, but those have been few and far between.  A movie is mostly judged by the star power of its male lead and not its story. Gulaab Gang was expected to do well as it dealt with self-defense and other issues related to violence against women. Unfortunately, audiences shunned it in favor of more light-hearted movies.

As I entered the theatre, I couldn’t help but notice that some people were there only because they were unable to find tickets for another movie. Gulaab Gang was like their last option. Even though the makers denied it, it was loosely based on the life of Sampat Pal Devi. It was promoted well online and offline, on comedy shows, dance shows, and a couple of sitcoms. Every effort was made to educate the masses about Sampat Pal Devi’s work, but none of it worked. The sympathy and empathy factor was simply too low.

There is no doubt that Gulaab Gang could have been better. It veered from the original plot and the acting was average. However, such issues haven’t stopped other movies from making crores of Rupees at the box office. Each of the ten top-grossing Bollywood movies has had plot-holes, average performances, bad direction or all three. In the case of Gulaab Gang, the issue of violence against women, women’s rights and the importance of self-defense were articulated clearly. The message was loud and clear; there just weren’t many viewers to receive it.

What could be the reason for Gulabi Gang’s limited release and Gulaab Gang’s failure, lack of sympathy, lack of interest, or sheer ignorance?

A documentary is too serious and un-engaging for the average Indian moviegoer. The concept of a documentary is still new for most of India’s population and a commercial potboiler without a significant male lead, isn’t considered worth the average Indian’s time or money. Most people go to the theatre to forget their day-to-day lives and not to have a mirror held to their face, highlighting their flaws. It is therefore difficult to make Indian viewers spend money to watch documentaries or movies like Gulaab Gang.

From a commercial standpoint, documentaries, as well as socially relevant films are a bad idea. However, the current social structure in India and its treatment of women should force filmmakers to look beyond commercial success.

Bollywood has the ability to touch a lot of lives and spread social awareness, which can be done easily with only a few movies each year.

While India’s movie-making industry needs to introspect when it comes to social issues and movie making, we as audiences need to give movies like Gulaab Gang and Gulabi Gang our time and attention, so we can be more aware and proactive in creating a better society.