When I was growing up, we didn’t even have a sex-ed class. Even in films, the first thing that happens after a woman is molested is – she waits for a man to save her!

Recently, a young Indian editor, Radha (name changed for this blog) had a horrifying experience in Mumbai after which she put up a status on Facebook expressing her feelings. That was when a lot of women shared their own stories and she decided to stand against the harassment instead of staying silent.

It is not the first time that she has been sexually harassed. However, her “If I don’t put an end to this nuisance, who will?” spirit is what got her justice. As Radha filed an FIR, Mumbai Police caught the culprit in less than 12 hours. Mumbai Police had almost 15 people and Radha thanks the department for such care and support.

Radha says she decided to break the chain and save other girls from becoming a victim to such cases. Read more about her experience in an interview we did with her:

Could you tell me in your words what happened?

I took a rickshaw from Infiniti mall, Malad to Borivali. I was texting my colleagues until I reached Kandivali and then a friend called and I got busy with that. I noticed the auto guy started touching his crotch, almost like he’s adjusting whatever the fuck that there is. It happened once, then twice, but I legit thought maybe he’s just uncomfortable and is only trying to sit comfortably.

How did you feel at the time of the incidence and afterward when you realized no one came forward to help you?

I was obviously scared. My instinct only told me to not panic and react loudly because he had the entire road to himself and I was still inside a moving rickshaw. But I did manage to note down the rickshaw number and that made all the difference. I saw a LOT of men around me but at that moment, I felt so disgusted, nobody seemed trustworthy (Especially because I was in a rickshaw and the area was a rickshaw stand. So it could have been a gang, for all I knew!). I was upset nobody helped. But when I saw the CCTV footage, I realized he took a U-Turn in less than 15 seconds of me running away. Even if they would have, they couldn’t have reached him.

Nevertheless, I didn’t scream, I didn’t ask for help. But if it were to happen in any other way, I’d have not done it differently because it was extremely scary and there’s no way your brain functions at a moment like this. I saved myself. That’s all I focused on doing.

In your opinion, what are some reasons people choose not to report? You mentioned you did not tell your parents because you did not want to worry them. What were your other concerns?

Honestly, my parents are really supportive. But they’re both patients and I don’t want them to worry about one more issue.  But you can’t really change that in parents and I don’t blame them at all.

Apart from making them worry, I think a lot of it has to do with the fact that women are never taught to raise their voice when they experience something like this. When I was growing up, we didn’t even have a sex-ed class. There’s no representation. We don’t have enough heroic stories about women being harassed in public. And the process that is expected to follow after you report an FIR is traumatizing. Not every woman has the will-power to live through the entire ordeal again. Simplifying processes, educating women and having a better representation of what must be really done after being sexually harassed is needed. It may seem tiny now, but it’s going to help an entire generation to grow stronger than what we are.

You said that this has happened before too and there are no streetlights in the area where this happened. Do you think the situation would not have reached to this level if the community had spoken out and held the municipality to take action? Aren’t we all a part of this problem?

Definitely yes. The area is horrifying at night. Imagine 70-80 rickshaws parked on both sides of the roads with a man patrolling in the night to ensure nobody else parks their vehicles and streetlights only on one side of the road. Bikers race with each other in the wee hours of the night, two illegal paan shops on either side of the roads. But who do I go to? See. I am a part of the problem and I admit it. But the people who actively ensure other doings in the vicinity like banning plastic, arranging meetings, etc., aren’t blind either.

I’m going to write to the local MLA to fix this situation but I am sure they know about it already and are only waiting for the next elections to fix it. I’m honestly not going to wait for them to do anything about it. The police inspector who helped me, in this case, has ensured he’ll remove the entire pay and park within a month and I’m going to believe him and wait for it to happen. I still use the same lane, irrespective of what happened because I am not going to let anybody win. I will only be cautious, not fearful.

To those reading, what is your message when it comes to addressing street harassment, which is rampant in most cities in India?

Let’s get one thing straight – Not every woman is brave when she’s vulnerable. It’s okay to break down and feel scared. You’re only human!  But be aware of every minute detail you notice. Colour of the shirt, license plate, hair type, facial features – ANYTHING that you can grasp in those 5 seconds of terror. Scream if you can, it’s alright if your instinct didn’t let you don’t beat yourself up for it. I kept replaying the whole thing in my head and thought of how I could attack him with my umbrella. But I realized if I could have, I would have. I didn’t.

There was only one way to get to the man – use your right as a citizen. File an FIR. Do not let the man escape. Because you’re not only doing it for yourself when you do this. You’re representing every other woman who he has molested in the past and will in the future. Treat this as your super-hero moment and save every one of them. It’s a brilliant feeling. Apart from all this pep talk, please also carry a pepper spray and a Swiss knife with you. 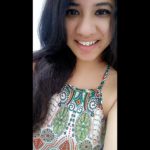 Deeksha Teri is a Freelance Journalist who cares about issues related to education and gender equality. Having lived most of her life in Haryana, she has heard stories that gave nightmares to her in childhood. However, instead of just hearing those stories, now she hopes to help the victims by raising awareness.