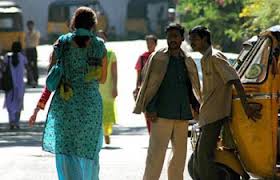 The metro in Delhi might be a boon for India, but girls in the city sure have another story to tell you. Like pretty much any public place in the country (or elsewhere, for that matter), a metro journey on an ordinary day can easily prove to be a harrowing experience for any woman. A metro ride is incomplete without a slew of stares and comments from male co-passengers from the time you step inside the train till you disembark.

I’m not a frequent traveller but I recently took the train with a friend. Because we were in a hurry, we couldn’t get to the women’s compartment. I can’t say the journey was traumatic, but it got me thinking about what constitutes normalcy in India. And what a woman may ordinarily expect when she’s at a public place in the country.

A woman is at risk of assault at any public place in India. Let’s not kid ourselves into believing we lead sheltered lives. A guy doesn’t always grope you. He doesn’t have to make known he’s talking about you or looking at you. As a girl, you can just tell. One can’t slap a guy for singing a song, even if one knows there are implied meanings to it. I can’t accuse someone of eve teasing if he sings Neele neele ambar par when I’m wearing a blue kurta. And why just the metro, I could be driving or walking on the road but it is enough reason for a male stranger to zoom the lens of his phone camera on to me.

Sexual offence doesn’t always mean physical harm. A lot of girls go through mental and emotional trauma routinely when offensive stares and comments come their way regularly at public places. There is little they can do about this. They can’t stop going where they need to. They can’t change their lives for strangers.

Well then what can they do? Should they simply go about their day ignoring the abuse that takes place all around them? Should they make peace with this misbehaviour thinking it’s just a part of life that they can be cynical about? And is it even worth taking a stand and fighting against something that isn’t viewed as a crime?

It is difficult to explain what truly qualifies as offensive behaviour. Except groping, none of it really causes tangible, physical harm, but it often tends to make a lasting impact on the psyche. But why should a woman wait to be groped until she says she shall not take it? She needs to respect herself, her body and her space much before something like that happens.

I come from a small town and we have a different way of dealing with such trouble. We usually ignore it or tell our parents about it when it worsens. Women in Delhi have over time, developed the ability to deal with such situations. You can’t fool around with them; they don’t tolerate it. That’s one good thing about the big, bad capital, it teaches you not to back down.

Today, I feel confident enough to tell a guy off if he starts to misbehave with me. It’s just something I now know I’m capable of. I wish I could say this to all women. We might be living in perverted environments. But that’s no reason to feel sorry for ourselves. There is much you can do, there is much you should do. You need to know that you should never look at yourselves as victims.