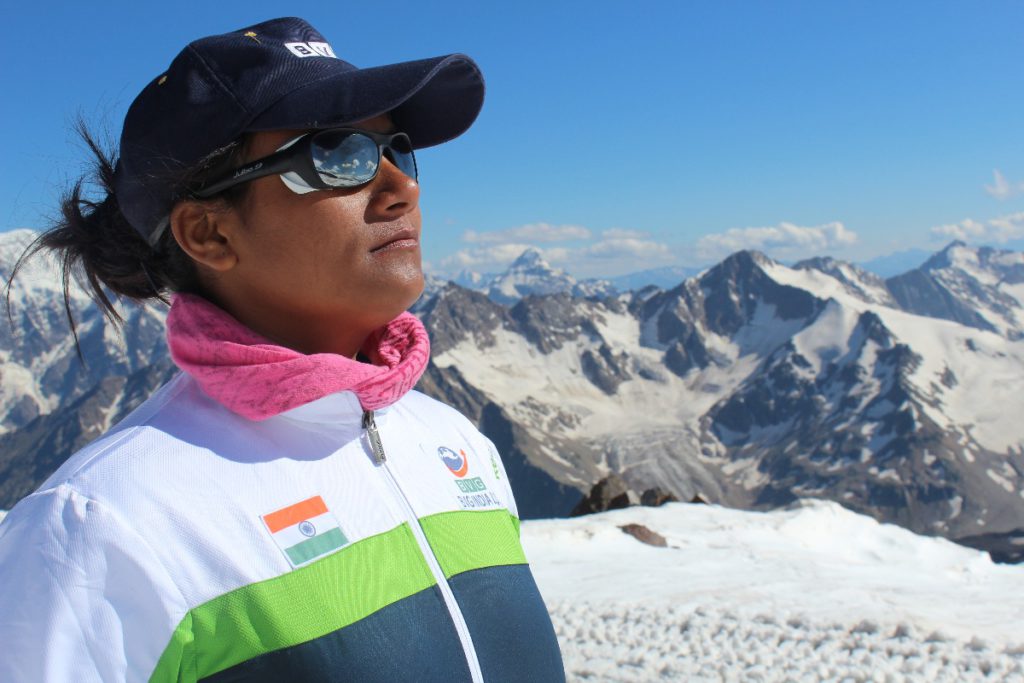 Climbing Mount Everest is the hardest thing, but climbing it with an artificial leg? That’s what Arunima Sinha accomplished in 2013. She is the the world’s first woman amputee to climb Mount Everest. “I turned my artificial leg into my strength and stubbornly chose the most difficult sport for myself,” says Ms. Sinha, a former national-level volleyball player.

Tell us more about yourself and what you do?
I am the first female Indian amputee to climb Mount Everest. In my earlier days, I was a national level volleyball player. I come from a very humble background and am a resident of Ambedkar Nagar, Uttar Pradesh. On April 11, 2011 4-5 thieves, who wanted to snatch my gold chain, pushed me out of a moving train. A train coming from the opposite direction ran over my legs. To save my life the doctors amputated my left leg. The right one was fixed with an iron rod.

Congratulations on receiving the Padma Shri! You are the first female amputee to climb Mount Everest. What inspired you to take up Mount Everest? How did you train for such a big climb? What were some challenges that you faced and how did you overcome them?
Thank you, very much. I am extremely honored to receive such a prestigious award. I thank our Prime Minister, Mr. Modi for this award and hope I will prove worthy of it. 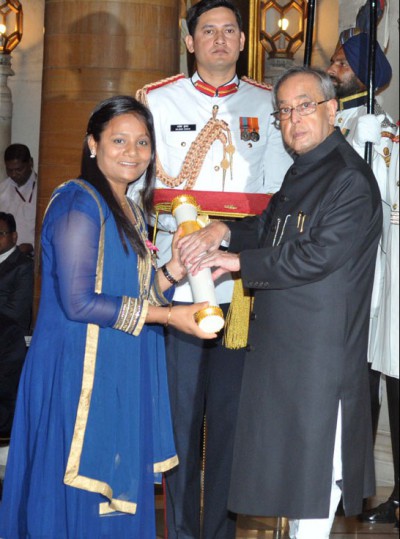 Receiving the Padma Shri Award at the Rashtrapati Bhawan

While I was in the hospital recovering from the big accident, I decided to climb Mount Everest. Cricketer Yuvraj Singh, who has successfully battled cancer, motivated me to do something with my life and inspired me. My brother in law, Mr. Om Prakash encouraged me to do something different. What can be more challenging than conquering the world’s highest summit with an amputated leg? I wanted to show the world that physical disability could never be a hindrance in achieving your dreams.

Apart from the physical challenges of training and getting back on my feet, I also needed two important things. One, sound training and guidance in mountaineering and two, financial sponsorship. On average, it costs about $80,000 to train. I had never seen that kind of money. It was a huge thing for me to raise this much money. When I shared with people that I wanted to pursue mountaineering, I was not only laughed at but people outrightly used to tell me that with one artificial leg and the other one supported by an iron rod, it’s impossible to climb Mount Everest . You must be mad! Forget this and take up a job somewhere.

The biggest problem was that people judged me based on my physical appearance. No one saw what was in my conscience. No one knew how motivated I was to conquer Everest. 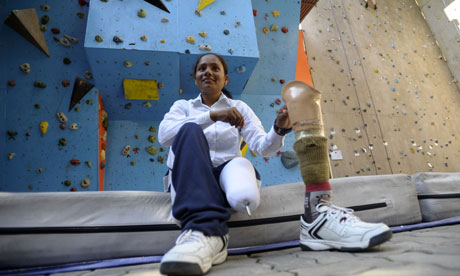 The day I was discharged from AIMMS hospital, we contacted ma’am Bachendri Pal, the first Indian woman to climb Mount Everest in 1984, by telephone and went and met her. Apart from my family she was the only women who showed faith in me. She had tears in her eyes when she heard my story and my resolution to conquer Everest. I immediately signed up for training under her at the Uttarkashi camp of the Tata Steel Adventure Foundation (TSAF), 2012.

I trained for two years with no breaks or holidays. When I started off, it used to take me three hours to get from the road to the base camp. A distance covered by most people in 2 minutes. I felt low when I couldn’t catch up with other ‘normal’ able-bodied people. But I was determined to outpace them. And I did. My left leg was a prosthetic and the bones of the right one had still not completely healed. It took me full eight months to bear the full weight on my shoulders, start with my fellows from the base camp together and reach the top first.

Finally after two years of rigorous training, on April 1st, 2013, I along with Susen Mahto (a TSAF instructor) started the ascent of Mount Everest. After a hard toil of 17 hours, I reached it’s summit  at 10:55am on 21st May, 2013. I was part of the Tata Group sponsored Eco Everest Expedition , becoming the first female amputee to scale the Everest. It took me 52 days to reach the summit. 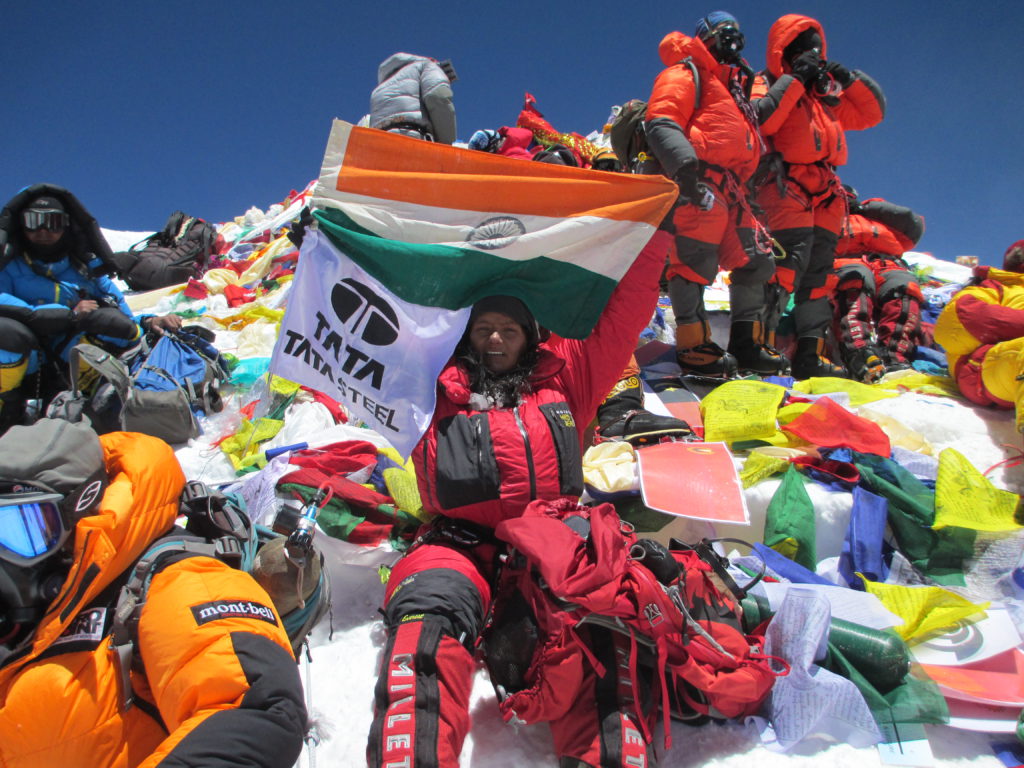 On the summit of Mount Everest

Who or what is your biggest inspiration? What keeps you going?
My family, especially my mother and brother-in-law, Mr. Om Prakash, are my biggest support system. My mother’s persistence in life to keep moving no matter what happens is a constant source of motivation for me. There is a sense of determination in all of us, which has come from my mother.

Second is Bachendri Pal. She has made me who I am today. And then Yuvraj Singh. He had come to meet me in the hospital and inspired me at a time when I needed it the most. 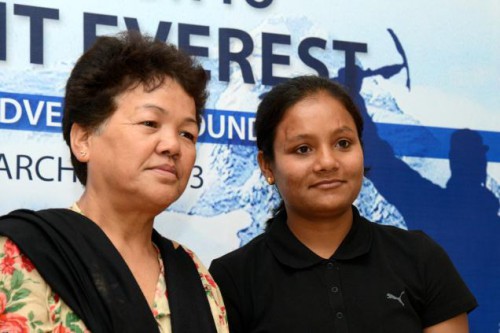 After you accomplished your goal of climbing Mount Everest, you decided to climb the seven highest peaks in the world. Tell us about that goal, how far are you? What’s the motivation?
When I came down from Mount Everest, a lot of handicapped people approached me. Men, women, kids who had spent their entire life using some form of support – sticks, wheelchair etc. or had resigned to their ill-fate started rapidly connecting with me. I started getting invitations to give motivational talks and these people told me that I had provided them a pathway. That I was the beacon of light in their life. After seeing what I had accomplished a lot of handicapped people had a renewed sense of hope and confidence. They felt they too could accomplish something in their life. I became their sources of inspiration and motivation.

I realized that to keep millions of people motivated I have to keep going. One time is not enough. People will soon forget and get demoralized. That’s when I decided to climb all the seven highest peaks in the world and continue the journey I have embarked upon. I want to set an example and be a continuous source of inspiration for people who are physically handicapped.

So far I have conquered three peaks – Mt. Everest (Asia), Mt. Elbrus (Russia), Mt. Kilimanjaro (Africa). I am on my way to climb the 4th one, Mount Kosciuszko (Elevation 2,228 m) in Australia starting April 14th, 2015. In December, I am scheduled to climb Aconcagua (South America).

At the top of Mt. Kilimanjaro

To climb Mt. Vinson (Antarctica), I need sponsorship of Rs 60 Lakhs (Approx. $1million). It’s extremely expensive to climb these mountains because of the specialized gear. Once I get sponsorship, I will then tackle the remaining peaks in Antarctica and North America.

What’s next? What is your advice to budding female climbers and physically challenged people?
I recently wrote a book ‘Born Again on the Mountain‘. It was launched by Prime Minister Mr. Narendra Modi. After I conquer the seven summits, I plan to open a free sports academy for poor and physically disadvantaged people. I am donating all the money that I get through awards and seminars toward this cause. The academy will be named Pandit Chandra Shekhar Vikalang Khel Academy. 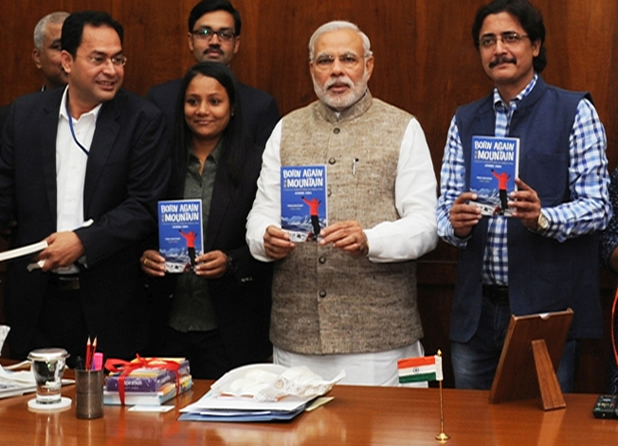 My advice for women and physically challenged people is that never lose heart and go for your dreams. Physical disability can never be a hindrance in achieving your life’s goals. The key lies in will power. If you have the mental strength, will power and firm determination nothing can stop you from achieving your goals.

My idea of empowered women sums to women with education and more importantly those who have the ability to stand up for what is right.

Sayfty’s mission is to Educate, Equip and Empower women so that they can protect themselves against violence. What is your message for our readers related to women’s personal safety and the issue of violence against women
No event or incidence should be hidden. We must always speak up and share with the community and collectively try and find a solution to the social problem. Girls should be self-sufficient financially and physically through education and self-defense training. India is a big country and it’s not practical to provide personal security to every women. Women and girls should take up self-defense training. I have asked the government to set up self-defense institutes.

There is no difference between boys and girls. This difference is not created by birth; it’s starts at home. Parents and families should not practice gender differentiation at home. If children grow up seeing differential treatment between a girl and boy, they start believing in it and practicing the same as adults. Today we have excellent examples of women achieving anything they want to. Women like Mary Kom, Kalpana Chawla, Sunita Williams, Saina Nehwal, Sania Mirza, all have set excellent examples of what women can achieve. We need to change our mindset and make women and girls self-sufficient in terms of self-defense and finances. This is not an easy task, it will take years but if we keep trying our future generation will reap the benefits of a safer and more equal society.

She was formerly a national volleyball and football player. While travelling by train from Lucknow to New Delhi on 11 April, 2011, she was pushed out of the running train by thieves wanting to snatch her bag and gold chain. About 50 trains passed over her as she was lying on the railway track. She was rushed to hospital with serious injuries. The doctors amputated her leg to save her life. While still being treated in the All India Institute of Medical Sciences, she resolved to climb Mount Everest. She was provided a prosthetic leg free of cost by a private Delhi-based Indian company.

She was felicitated by Dr. A.P.J. Abdul Kalam, former President of India, at Vadodara on August 10, 2013 during the international youth conference organised by Ramakrishna Mission, Vadodara. She was felicitated by Shri Narendra Modi, the then Chief Minister of Gujarat, on January 11, 2014 at Mahatma Mandir, Gandhinagar in the presence of about 5000 youths of India and abroad and a large number of dignitaries. She has received many prestigious awards from many reputed organizations including The Tenzing Norgay Award, Salaam India Award by India TV, Amazing India Award by Times Now, to name a few.

She has now dedicated herself to social cause. She is planning to start an International Sports Academy for physically challenged people and is motivating thousands of youths throughout the country with her inspiring life story and the message of Swami Vivekananda. She has written a book “Born Again on the Mountain“, launched by Prime minister of India Narendra Modi in December 2014. A film on her life is being made in Hollywood. She is now undergoing training at Ramakrishna Mission, Coimbatore for participating in Para Olympics, 2016.