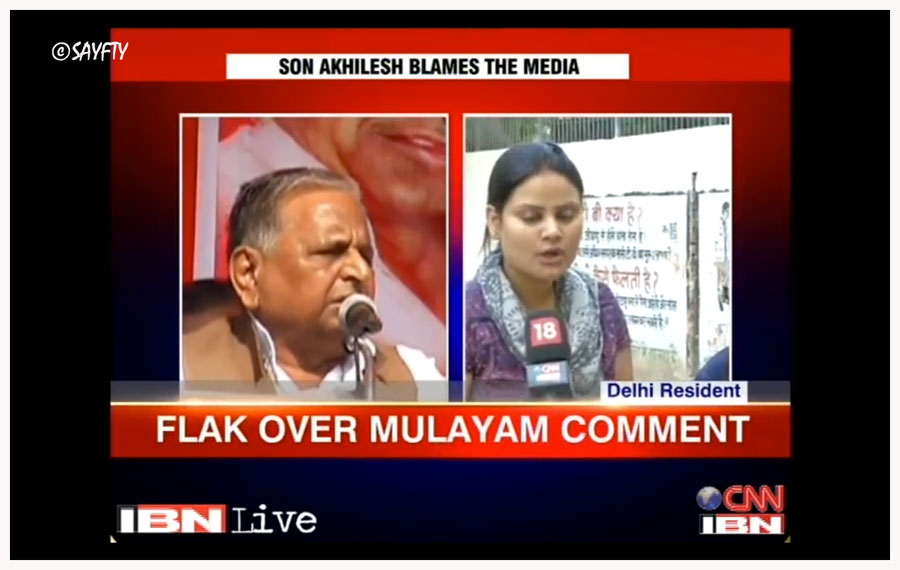 I read the news these days and I can’t decide if the Indian voter is naive or simply stupid. How is it possible that someone like Mulayam Singh Yadav not only leads a strong political party but also gets elected into power multiple times?

This is a man who has had two wives simultaneously, an inefficient and corrupt son Akhilesh and a political party with candidates who have 43 criminal cases against them.

How is it possible that people like him are acknowledged as political leaders and not political jokers in this country?

Men like him are so full of themselves and hungry for power that they outdo themselves, stooping lower each time to retain their vote bank. This time however he stooped so low that it is difficult to recognise him as a human being. Yesterday Mulayam Singh Yadav publicly declared that if his party comes to power, it will fight against giving rapists the death penalty. By saying so he slapped the face of every Indian who selflessly fought to get the new anti-rape law into force.

He then had the audacity to say, “Ladke, ladke hain… galti ho jati hai (boys will be boys… they commit mistakes),” and that, “those who make false allegations should be punished”.

His words offended me personally, and as a woman I believe it will offend every woman in the country. I could not agree more with Kiran Bedi when she said “These statements call for the total boycott of such a political leader. People should be asked to vote out such people completely.”

Mulayam, you are the biggest nincompoop in this country.

Mulayam, a woman deserves dignity and respect, not objectification and humiliation. She does not report a rape and set herself up for repeated humiliation by society and the judicial system for fun or vengeance. She does this for justice, for a crime that is committed against her liberty.

I don’t think you have the sensitivity or maturity to understand the trauma a survivor goes through during and after such an act. Going through a complaint, its clarification, medical and mental tests and then lengthy judicial proceedings is no child’s play and no woman takes this route because of mere misunderstanding and disagreements with a man. Such false allegation situations only take place in B grade movies, especially the kinds that may be produced or watched by your type of D grade politicians.

Mulayam just in case you missed it, rape is a freaking crime! Such a heinous crime needs a harsh punishment or else the entire country will be as unsafe and as disgusting a place to live as Uttar Pradesh. Thanks to people like you, UP records a crime rate of 33.4% and more than 2000 rape cases a year. It is time to wake up and smell the foul air of Uttar Pradesh and think a zillion times before you make irresponsible and arrogant public statements.

I may now agree with people like Medha Patkar that the death penalty is not the best way to bringing about reforms in Indian society. Instead I think a better way to bring about change would be by publicly whipping arrogant nincompoops like you for supporting criminals and belittling women.

At this point I just want to know why the average Indian votes for a politician like you. Why are we so ignorant and irresponsible? Why can’t we boycott criminals like you and clean up our country? What more will it take for us to re-evaluate our choices?