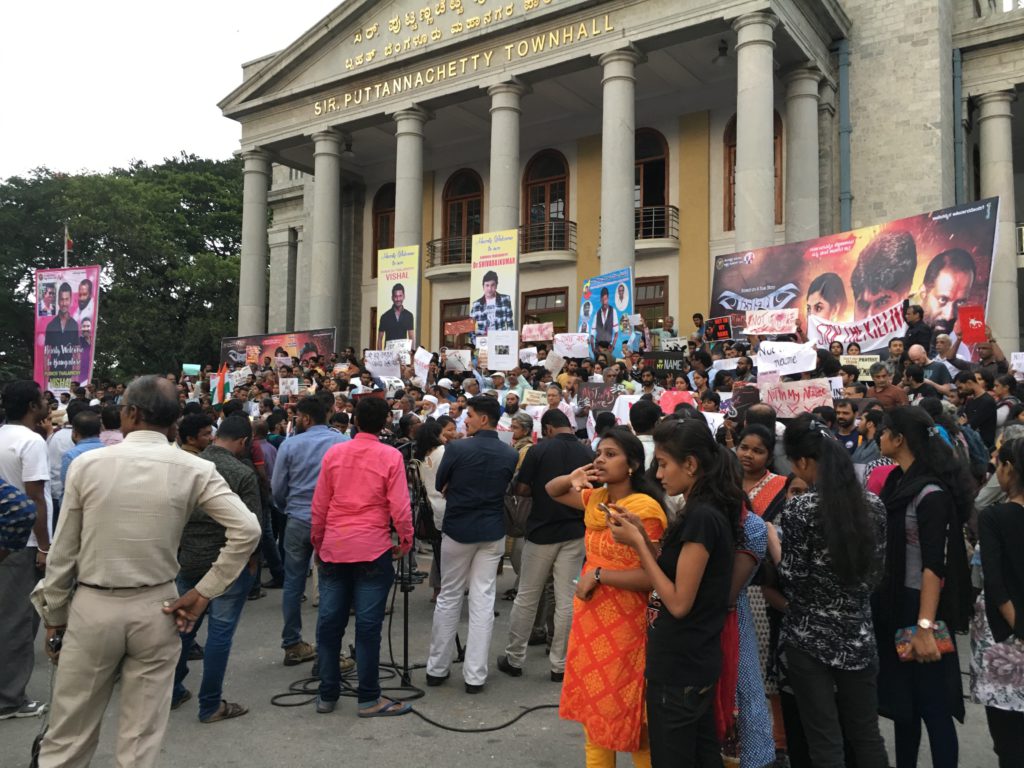 India unites to protest mob violence, says lynching should not be carried out in the name of religion, caste or creed!

India has lately been divided over the recent lynching incidents. One side argues that mob violence is meted out towards specific minority groups, whereas the other side agrees to disagree. But, we all can agree that mob violence is a reality in India. Sectarian issues aside, mob violence is a method adopted by individuals across the nation to correct alleged wrongdoings. India finally unites to protest against such acts of violence.

What Are These Wrongdoings?

In the case of Junaid Khan, a sixteen-year-old teenager stabbed to death by a mob armed with knives, the problem was his religious affiliation. How? Our national usually brands Muslims as the problematic “beef-eaters.” Junaid Khan and his brother were Muslim, hence were labelled “anti-nationals”. In present-day India eating a particular kind of meat determines whether you are a patriot or not. Thus, the mob suspected that because Junaid and his brother were Muslims, they were carrying beef in their suitcases. In reality, the brothers were returning home after a day of Eid shopping. Due to this grave injustice, the mob decided to deprive Junaid of his life.

Upon reading about Junaid’s lynching, Saba Dewan, a Gurgaon based filmmaker called for a protest. Little did she know that her call for action would be reciprocated by several cities in India and abroad. On 28th June, the nation came together to assert that these lynching incidents would not be carried out in the name of ordinary citizens, in the name of religion, or in the name of caste and creed.

Anand Mangnale, a freelance advisor at Islamic Relief India, appeals to social media to stand up against the lynching atrocities. He questions the silence of bystanders as individuals are lynched. He wonders, “someone is killed on the suspicion of eating beef, someone else for allegedly illegally smuggling cattle, someone for being a Dalit, someone else for trying to save the dignity of a woman. People are beating people up for cheering for another cricket team and this still isn’t alarming, for us (sic)?” At the end of the protests, Mangnale had answered his question. He claimed that the power of the protests lay in the layman’s discontentment with lynching. He states, “This event had no NGO, organizational nor political support, and it was [the] sheer discontent of people…generated organically that drove the rallies.”

Like Mangnale and many others, I joined the Not In My Name protest in my city. A decently sized group crowded around the stairs of Town Hall in central Bangalore. People carried witty and innovative banners that humorously denounced the atrocities and the inaction against lynching. The protest was mostly silent with a few slogans being chanted occasionally. But gradually, the silence was broken, almost symbolically, as one protestor began singing Hum Honge Kamyaab (We Shall Overcome). Soon every protestor chimed in and the silence disappeared almost instantaneously. The silence of bystanders in mob violence incidents was replaced by the voices of thousands pledging to overcome the sectarian violence plaguing the nation and its communal harmony.

People of all walks of life had assembled at Town Hall. There were the young college students, the IT workers coming in straight from office, retired professors and local activists amidst the crowd. Everybody, myself included, had braved the infamous Bangalore traffic for a larger, important cause. I, like several others, spent a little over a total of four hours in commute. Consequently, the crowd’s endurance demonstrated not only the importance of the cause, but also the people’s desire to quash the silence. People refused to watch as communal violence disrupts the nation in the name of religion and other sectarian divides. People refused to silently embrace lynching in their names.

Protestors vs. The Odds 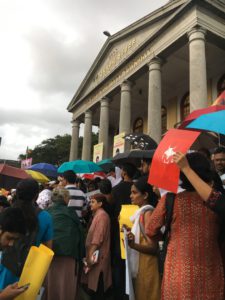 The ethos of the protestors was a sight to see. Come rain or hail, protestors refused to give in. In fact, the torrential shower and the chilly winds worked to strengthen their spirit. The singing grew louder and people swayed holding hands. One could hear fierce debates amongst people in the crowd, talks of action and inaction, and strong opinions about the cause and solution of communal tension in India. The place was every political science major’s dream!

After an hour of enduring the rain and chilly winds, protestors were now up against Bangalore Police. They wanted us to vacate the premises claiming that we had permission to protest only for an hour. Despite some resilient protestors, the crowd had dispersed fearing the consequences of questioning authority. No one wanted to taint a peaceful protest of mob violence with additional violence. However, as I waited for my cab to arrive, I heard a procession band playing as if to welcome someone. As my uber got there, the driver exclaimed that it was his favourite Tamil actor visiting Town Hall. So now I wonder, was the protest cleared out for a Tamil actor? Alas, it is only in India that an actor’s value trumps that of minorities.

Ishika is a College of Social Studies major at Wesleyan University. She is interested in women’s rights specifically in the developing world, and currently works with refugees in Connecticut, USA. An avid reader, Ishika enjoys works of intersectional feminists and is the proud human of a pug named Donut.