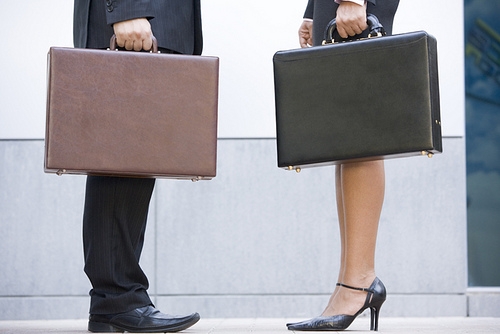 A walk near a construction site in my city made me think about the involvement of women in male-oriented jobs. What caught my eye was the large number of women working with their children at the site. These women were doing the same heavy lifting as men, while constantly taking care of their children. One of the women there told me that her daily schedule involved waking up at five am, cooking for her family, going to work, coming home, cooking again and cleaning then her house. Her ability to efficiently multi-task didn’t surprise me, but I did wonder whether her value was recognised at her workplace as well as at her home.

There is no doubt that even though women have come a long way over the past decades, they still struggle with gender inequality in the workplace.

The perception of jobs and roles has always been stereotyped. The word pilot creates a mental image of a man wearing a uniform whereas the word nurse creates an image of a woman. The words teacher, soldier, mechanic, secretary, accountant and receptionist also create a strong gender-oriented mental image. However, there are women who have broken these barriers and made significant inroads in male-dominated industries and positions.

Surekha Yadav became India’s first woman to pilot a train. In an interview with The Times of India she said, “It is not that things are any different because I am a woman.” She believes patience, concentration, quick decision-making, alertness, discipline and resilience are required by any motorman, irrespective of gender”. Surekha studied electrical engineering at Karad in Western Maharashtra and has been driving local trains for over a decade. Prior to that, she worked as an assistant driver on goods trains for ten years.

Chhavi Rajawat left a lucrative post-MBA corporate job to become the sarpanch of Soda, a village in Rajasthan. In 2011, she addressed delegates at the United Nations, stressing the importance of civilian participation in promoting socio-economic development. She was honoured by former President APJ Abdul Kalam and also given the “Young Indian Leader” award by IBNLive.

Indira Nooyi (CEO, PepsiCo) has repeatedly been listed in the Forbes 100 Most Powerful Women list. She has been credited with the restructuring and diversification of PepsiCo, and has consistently been held responsible for its profits.

Even in the male-dominated hindi film industry, where female roles are objectified and stereotyped, actresses like Vidya Balan and Kangana Ranaut have done some strong, female-oriented roles in films that have gone on to make high profits. Through movies like The Dirty Picture, Kahaani and Queen, they have changed the perception that audiences do not want to see women-centric roles.

I’d finally like to close with a quote from Oscar winner Cate Blanchett’s speech, ” I’m so very proud that Blue Jasmine stayed in the cinemas for as long as it did…. Thank you to the audiences who went to see it and perhaps those of us in the industry who are still foolishly clinging to the idea that female films with women at the center are niche experiences. They are not. Audiences want to see them and, in fact, they earn money. The world is round, people”