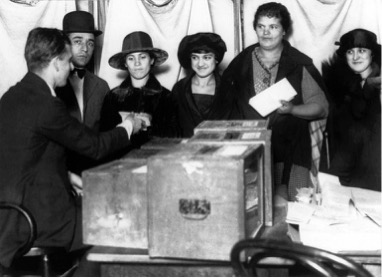 Introduction
To think that there was a time when women did not have the right to vote might seem difficult. It might even seem outright absurd. However, once upon a time, this was the case. In fact, it was only starting the late 19thcentury that voting rights for women began to be granted. The women’s suffrage movement has worked tirelessly through the years to grant this right. Its impact is profound. Starting from New Zealand in 1893 to Saudi Arabia in 2015, countries have allowed women to vote.

Most importantly, we overlook the importance of women voting. Instead, we take the right for granted and don’t value it enough. Therefore, it is necessary to take a look at why women should vote. For example, we could appreciate the right more through this education.

Why should women have the right to vote?

It is a basic right: Voting is a basic human right. Article 21 of the Universal Declaration of Human Rights states that: “The will of the people shall be the basis of the authority of government; this will shall be expressed in periodic and genuine elections which shall be by universal and equal suffrage and shall be held by secret ballot or by equivalent free voting procedures.”

In short, humans have the right to select their own leaders. They have the right to take part in governing their countries. Why should only one half of the population, men only have this right? The same declaration states that rights should be given to everyone, regardless of differences (Article 2). That is everyone, regardless of gender. That is both women and men.

Laws affect women as much as men: We vote to select leaders and choose the government that will be best for our country. People vote for their rights and beliefs. Our votes contribute towards laws and policies. They affect each and every citizen, despite differences in gender, ethnicity, etc.

It would elevate women’s positions in society right to vote is a social responsibility of each citizen. It is an obligation everyone has towards their community. If women cannot vote, they are being shut off from being a complete citizen. In fact, this was the case in America in the 19thcentury. The 14thamendment (ratified in 1868), defined citizens as being ‘male’.

Women and their opinions belonged only to their respective households. In society, they did not matter, even though they were a part of it.

However, if women do vote, the scenario would be different. Women would read and research in order to vote, thereby becoming more aware. It would make them more publicly active and even encourage women to run for office!

It would make our society a better place: Women would vote to reform society and amend laws. A woman’s input is equally important to a man’s in building a society. Women could offer a unique perspective on a social issue. Their experiences are different for men. Hence, their opinions may differ too. Different views on an issue could help find more effective solutions.

Women could also help in creating better governments. To win women’s votes, parties would be less willing to endorse candidates of questionable characters. They would avoid known sexual harassers and misogynists. In this way, people of good character and morals would be selected to government. This is how important women voting truly is to society.

Why should not women vote
is absolutely no reason why women should not vote.

How do we encourage more women to vote?﻿

Today, almost all countries allow women to vote. However, this does not mean it is easy to do so. Women still face obstacles in voting. Some women still hesitate to vote. In some places, female voter turnouts are relatively low. For example, in the recent Pakistani elections, there were two constituencies where it was <10%.

The most important tool in doing so is education. We must educate and empower more women to vote. A lot of women hesitate to vote because they feel as if their votes do not matter. We must dispel this wrong misconception and let women know that their voices matter. Reinforce that they are crucial in building better communities.

Education starts a young age. Schools should incorporate topics on such rights into their curricula. We should teach young about the suffrage movement. Let’s tell them more about important suffragettes like Susan B. Anthony. This could inspire and empower them.

Young girls are not the only people who need education. We can educate older, more ‘conservative’ women as well. Let us talk with our grandmothers and make them understand the importance of voting. We should let them know that voting is not a masculine task. Rather, it is a civil duty.

Media could also play a pivotal role in spreading awareness. Media should make documentaries and movies that revolve around this topic. Movies such as Suffragette are an example of this. Newspapers could run more articles on this topic as well.

Men could act as allies too and talk with their misogynist peers about the importance of women voting. They should take part in awareness and make voting easier for women.

The women’s suffrage movement has come a long way. It has spanned years and spread all across the globe. The UK celebrated 100 years of women voting last year. In America, the ratification of the 19thAmendment gave women this right in 1920.

Layaal Ali is a Maldivian 12th grader currently residing in Malaysia. A staunch feminist, she believes strongly in bringing down the patriarchy. She enjoys reading good books, and writing about women’s rightsCheck out her last blog, Un-Stereotyping Gender!